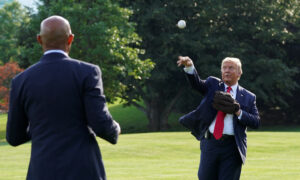 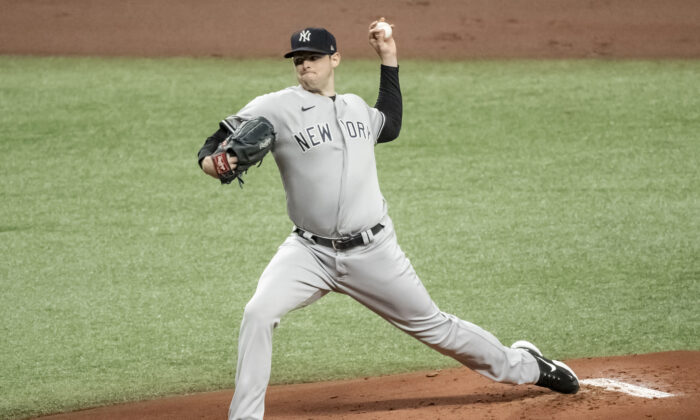 New York Yankees starter Jordan Montgomery pitches against the Tampa Bay Rays during the first inning of a baseball game in St. Petersburg, Fla., on May 11, 2021. (Steve Nesius/AP Photo)
Baseball

About two hours before the game started, it was announced that Yankees third base coach Phil Nevin is away from the team after a positive COVID-19 test.

Boone said the Yankees are preparing as if they will play Wednesday night.

“Get ready and hope that we avoid any more hiccups or potential positives and things like that,” Boone said. “Major League Baseball and their doctors are advising us. They know what would require a non-play but they also were very confident today that we could play and should play.”

Judge said the players voted to take the field.

“It was stressful but it’s all part of it,” Judge said. “You’re going to have days like this where things happen. We all kind of talked about it, seeing what was best for us. We’re all here, we decided we were good to go and ready to play.”

The Yankees beat Tampa Bay for just the second time in seven games this season. The AL champion Rays had won 18 of the last 23 meetings, including a five-game victory in last year’s Division Series.

New York slugger Luke Voit went 0 for 3 in his first game this season. The major league home run leader last year with 22, he was reinstated from the 10-day injured list after having knee surgery on March 29.

Voit was hit by a pitch around the right wrist in the fourth inning and had a flyout to the right-field wall in the seventh.

Montgomery (2–1) gave up one run, two hits, walked one, and tied a career high with nine strikeouts. After Jonathan Loaisiga worked two innings, Aroldis Chapman got three outs to get his eighth save and complete a three-hitter.

Chapman had an eventful ninth, including a visit by a trainer. Austin Meadows reached on shortstop Gleyber Torres’ error, but Sánchez later threw out the Rays DH attempting to advance to second. The lefty also walked one and struck out one.

Boone said Chapman has a little soreness in a nail but is fine.

Judge started in right field after being rested Sunday and hit a first-pitch, first-inning solo homer off Luis Patiño (1–1). Judge, who entered with two hits in his previous 24 at-bats, has been dealing with what Boone is calling “lower leg stuff.”

“I’d tried to get something going in the first inning and I was happy to do it,” Judge said. “I kind of feel like Montgomery rode that. He had a strong outing. He was impressive today.”

Sánchez made it 3–1 with his shot in the seventh off Josh Fleming. It was his second homer in three games after a career-high-tying 18-game homerless streak.

Mike Zunino connected on a 472-foot solo drive in the third for the Rays. It was the fourth-longest homer in MLB this season, behind Yermin Mercedes (485 feet), Ronald Acuña Jr. (481 feet), and Marcell Ozuna (479 feet).

Yankees: CF Aaron Hicks was a late scratch with a bruised right shin. He fouled a pitch off it in the eighth inning Sunday against Washington. 3B Gio Urshela (sore left knee) returned to the lineup and singled in four at-bats.

Rays: GM Erik Neander said CF Kevin Kiermaier, who sprained his left wrist sliding into second base Saturday, has no broken bones or ligament damage. 1B Ji-Man Choi (arthroscopic right knee) could be back in the next couple days.

Yankees ace Gerrit Cole (4–1, 1.61 ERA) will start Wednesday night’s game. The Rays will use RHP Collin McHugh (0–1) as an opener. Cole is 3–0 in four postseason starts against Tampa Bay but is 0–4 over eight regular-season appearances.