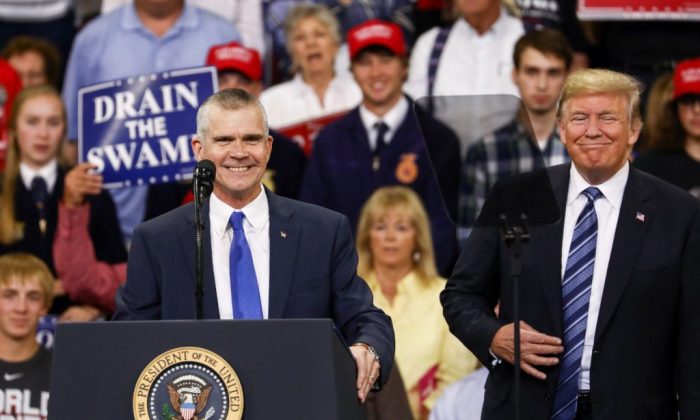 Voters will now cast ballots in Districts 1 and 2. Before redistricting, incumbent Rep. Matt Rosendale (R-Mont.) had represented all of Montana in Congress since his election in 2020.

Rosendale is the current Republican front-runner in District 2, heavily weighted in favor of Republicans at 60 percent versus 38 percent Democrats, according to Dave’s Redistricting, which monitors 2021 congressional districts.

Billings financial adviser Gary Buchanan is running as an independent in District 2q.

Zinke currently leads in campaign fundraising with $2.5 million raised to date. According to the Federal Election Commission, Rosendale has collected nearly $1.4 million.

Zinke said on his website that he’s “deeply honored” to have earned Trump’s endorsement.

“In a few short months of [the] Biden/Pelosi regime, we’ve seen their radical plan for complete power and control. Our Western values and way of life are worth defending. I look forward to getting back in the saddle and fighting for Montana and the America First Policies.”

“It’s bad enough that the Biden-Harris Administration has already cost Montana jobs and much-needed revenue through the shortsighted cancellation of the Keystone XL pipeline and the ill-fated moratorium on energy development on federal lands,” he said.

In 2018, Zinke stepped down as interior secretary amid investigations of ethics violations and working to weaken or dismantle environmental protections.

During his campaign, the former Navy SEAL has come under attack on social media, with some opponents calling into question his military service in Iraq and other opponents accusing him of spending too much time outside the state.

“The federal government has failed Montana in properly managing federal lands in our state. This has led to catastrophic wildfires that destroy our clean air, pure water, and abundant wildlife,” he says on his website. “They have forced Montanans off public lands by blocking our access to over 20,000 miles of public access roads and crippled ‘Made in Montana’ responsible natural resource production.”

Heuer, by contrast, is taking a “systematic approach to reach the desired solution,” offering 40 years of experience with construction, engineering, and small business ownership.

“I am boots on the ground in Western Montana every day, running my small businesses in the field and the office. I am blue collar, and white collar, callused hands with a sharp mind,” he said on Facebook.

In Congress, Heuer said he would pursue an “arm’s length, walk tall, speak softly with a big stick and Brinkmanship approach” to foreign policy. He supports the military, believing that the United States is “about two steps from boots on the ground war with Russia.”

“With good conscious [sic], I do not believe America can stand by and watch/tolerate the attack and targeting of children and residents in Ukraine, and we only impose sanctions,” Heuer said on his website.

As a pro-Constitution candidate, he opposes the “socialist-liberal” agenda and favors secure borders, judicial responsibility, affordable health care, and the right to bear arms. He said his company is currently developing a program to protect schools against mass shootings.

Pastor Mary Todd, a small business owner and “unapologetic America First conservative,” said her goal in Congress would be to preserve American values. She’s pro-life and believes in secure borders, the Second Amendment, and the protection of public lands.

Jette said he is seeking the Republican nomination in a “campaign to save America.”

“The problems Americans face are so big today because for years we kept kicking the proverbial can down the road,” he said on his website. “We elected people who were not up to the task or have the ability to solve problems, or who simply have been more interested in exacerbating the problems for personal and political gain and reputation.

“We must put those who, not only believe in America, but are willing to continually live a life that demonstrates that belief into office.”

Jette supports an innovative economy and flexible workforce and wants to put health care back in the hands of physicians. He also backs a strong military and education system that “does not reinforce bad habits or merely keeps students busy.”

“In D.C., Montana is continually stuck in the mud and us Montanans deserve more from our elected officials,” he told The Epoch Times. “As a pharmacist, I have focused on accelerating my patients’ health to higher altitudes and stepped forward during this pandemic. As a representative, my focus will be to move us forward while gaining altitude.”

As a rural health and economic development leader with a “track record of delivering results for underserved and rural communities,” Neumann seeks to improve health care access and protect Montana’s public lands.

She said she would “make sure Montanans have access to good jobs and wages, that our small businesses can succeed, and that families who’ve lived here for years or generations can afford to stay.”

Monica Tranel, her opponent, sees the Montana she grew up in “slipping away.”

“Montana shouldn’t be used as a playground for the rich while folks in the middle can’t get ahead no matter how hard they work,” Tranel told The Epoch Times. “If you work hard, you should be able to afford a decent place to live, support your family, and save for a secure retirement. I will support legislation that invests in the middle class in Congress instead of tax giveaways to the super-rich.”

Tranel said she would work to create a strong labor force and develop more well-paying jobs by leveraging the state’s natural resources.

“Montana should be a leader in the energy transition. And I will take on corporate monopolies squeezing our Main Street businesses, ranchers and landowners, and all Montanans,” she said.

A Republican Voice for Native Americans

Walking Child said he would be a staunch constitutional conservative voice for Native Americans—and all Americans—in Congress.

“The main pressing issue is these Democrats are evil SOBs,” he told The Epoch Times. “You have a bunch of idiots out there.

“I will be assertive and aggressive and protect our small farms and ranches.”

He would also oppose large corporations engaging in “economic slavery.”

“I don’t feel (Democrats) are out of touch—everybody in America knows they’re out of touch. We’ve got to go in and fix it,” Walking Child said.

John Lamb is running unopposed as the Libertarian candidate in District 1.

Montana’s June 7 primary winners will advance to the general election on Nov. 8.