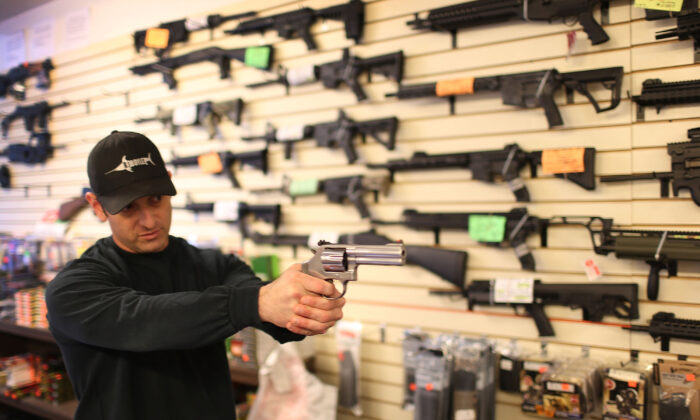 A salesman shows a customer a handgun in Delray Beach, Florida, on Jan. 5, 2016. (Joe Raedle/Getty Images)
US News

The Montana Supreme Court struck down a local gun law that had been upheld by a state judge, which would have forced Montanans to submit to background checks for every transfer of firearms, including purchases at gun shows.

The ruling comes amid a renewed push from the left to expand gun control throughout the United States. Democratic presidential candidates have been embracing crackdowns on legal gun ownership as they compete for primary votes.

“We’re not going to allow it to be used against our fellow Americans anymore,” he said.

In a case cited as City of Missoula v. Fox, the Montana high court ruled unanimously in favor of state Attorney General Tim Fox, an elected Republican, who in 2017 authored a legal opinion invalidating the Missoula City Council’s ordinance because it infringed on both the U.S. Constitution and Montana’s state constitution. Fox’s legal opinion was overturned by Missoula District Court Judge Robert “Dusty” Deschamps, who ran as a Democrat for the U.S. House of Representatives in 1998.

Missoula adopted Ordinance 3581 on Sept. 26, 2016, which imposed a requirement “upon persons purchasing or otherwise receiving a firearm in the City, including from private unlicensed dealers, to pass a national instant background check,” the 5–0 decision stated. The ordinance, which, in the city’s words, was enacted “to close a loophole in federal law,” provided some exceptions such as for transactions involving immediate family members, antique firearms, law enforcement, and temporary transfers “necessary to prevent imminent death or great bodily harm to the transferee.”

The ordinance went too far, according to the court.

Although Montana law allows local governments to regulate “possession” of firearms, it doesn’t permit restrictions on the purchase, sale, ownership or transfer of ownership, or transportation and use of firearms, the court stated.

“Nothing within the language of [the state code] permits cities to regulate these other functions in any manner, yet the ordinance does so,” Justice Jim Rice wrote.

“Although purporting to merely suppress the ‘possession’ of firearms by convicted felons, adjudicated mental incompetents, illegal aliens, and minors, the scheme of the ordinance goes much further.”

Gun-control groups have been fighting state-level firearms preemption laws across the nation by enacting local ordinances that conflict with state law, “in hopes that courts will strike down or weaken the preemption laws on the books,” Cam Edwards wrote at Bearing Arms.

“In this case, the Montana Supreme Court delivered a smackdown to those eager to infringe on the rights of residents,” Edwards said.

While state lawmakers tried to roll back the local law by limiting localities’ ability to regulate guns, Gov. Steve Bullock, a Democrat who’s now running for president, vetoed the legislation.

“If a few good things came out of this, I hope that there’s greater public awareness of the background check system and that people can use it voluntarily for private transfers.”

Von Lossberg said the background check system in its present form has blocked 20,000 gun sales in the past two decades in Montana alone.