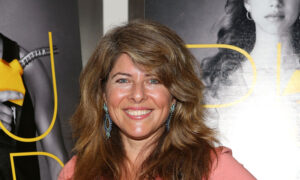 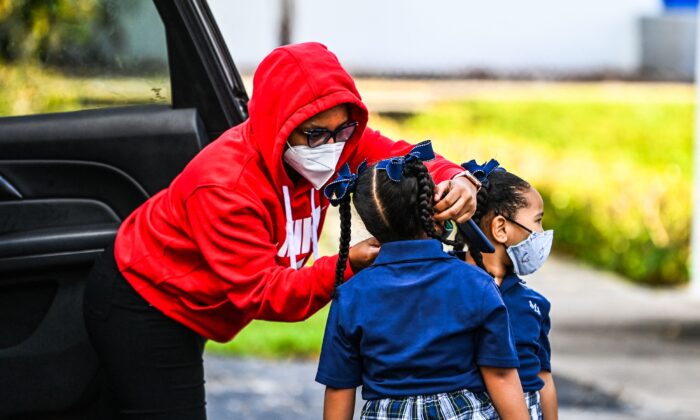 A mother adjusts the facemask of her child as she enters the St. Lawrence Catholic School on the first day of school after summer vacation in north of Miami on Aug. 18, 2021. (Chandan Khanna/AFP via Getty Images)
US News

Parents in Billings, Montana, who say parents should decide whether their children wear masks, are demanding the immediate resignation of the local school district superintendent. He had abruptly announced the local K–12 mask mandate would be reimposed because the reported number of COVID-19 infections among students was rising.

Meanwhile, Montana Gov. Greg Gianforte, a Republican, is holding firm in his opposition to mandatory masking in enclosed spaces. The Centers for Disease Control and Prevention (CDC) is recommending that vaccinated people in areas with high COVID-19 caseloads should resume wearing face masks indoors.

Greg Upham, superintendent of Billings Public Schools, announced that effective Aug. 22 he was “reimplementing required masking for all students, employees, and visitors during the normal school day at our K-12 schools,” after previously saying masking would be optional.

“Based on the reported COVID-19 infections in Yellowstone County, including the steadily rising number among school-aged children, the outbreak with our students, the fact our hospitals are at capacity, and that the Delta variant is highly infectious, I have concluded it is in our best interest to reimplement masking in our schools,” Upham said. “This is necessary to slow the spread of COVID-19 and to keep our schools open.

“I recognize the timing of this decision is unfortunate. Just a couple of days ago I announced my decision that masking would be optional in SD2 [School District 2]. At the time, I was hopeful we could start this year without required masking. However, in the last 48 hours I learned that what started as one positive student case of COVID-19, increased to at least ten percent of that team, in just a few days.

“If this same rate of transmission occurred in our classrooms during the first week of school, we could potentially have hundreds, if not thousands, of our students out of class within a short time frame if we do not mask. School districts in other states have already seen that occur.”

After the sudden masking policy change, three teachers were reportedly suspended for refusing to wear face masks on the job.

“Billings parents are requesting the immediate resignation of Superintendent Upham,” Moms for America founder Kimberly Fletcher said in a statement the day of the Aug. 31 rally in Billings against mandatory masking. Moms for America participated in the rally that was organized by local groups Make Masking Optional Billings Public Schools and Montana Family Rights Alliance.

“This outrageous last-minute mandate cannot be tolerated, and moms have something to say about it. I urge all parents to go to the rally today to support this movement and demand change, for the sake of their own children as well as their rights as parents.”

Moms for America describes itself as “one of the fastest growing movements of women in America … on a mission to empower moms with the knowledge needed to stand up for their own rights as parents.”

Concerned parents gathered outside the local school district headquarters in Billings for the second Tuesday in a row to protest the masking mandate.

About 200 people showed up for the event, said Tamra Farah, executive director of MomForce, a project of Moms for America that participated in the rally in Billings. The Billings Gazette estimated the crowd at around 100 people.

There was also an apparently smaller counter-protest of people driving automobiles and honking horns in the area at the same time, consisting of people in favor of mandatory masking.

Farah told The Epoch Times on Sept. 1 that there aren’t data showing “children in K through 12 are at risk for dying of COVID.”

Fewer than “350 children the last time I checked have died of COVID in the United States that were in K through 12.”

“It makes no sense” to mandate masking for children, she said.

“There are always going to be a few that might be susceptible, but there’s nothing that merits this type of a response of masking children,” she said.

“Parents should make that decision. This is not about saying no child should wear masks, it’s just about parents needing to decide these things.

“Parents know their child’s health better than anyone else. We’re not anti-mask or anti-vaccine: We’re just pro-parental choice.”

CORRECTION: The original article implied that Moms for America organized the rally. In fact, the event was organized by Make Masking Optional Billings Public Schools and Montana Family Rights Alliance.