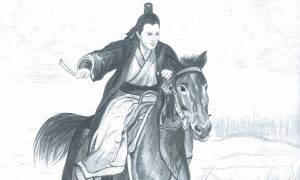 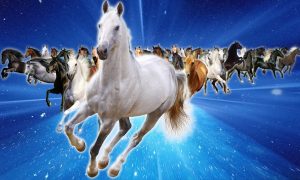 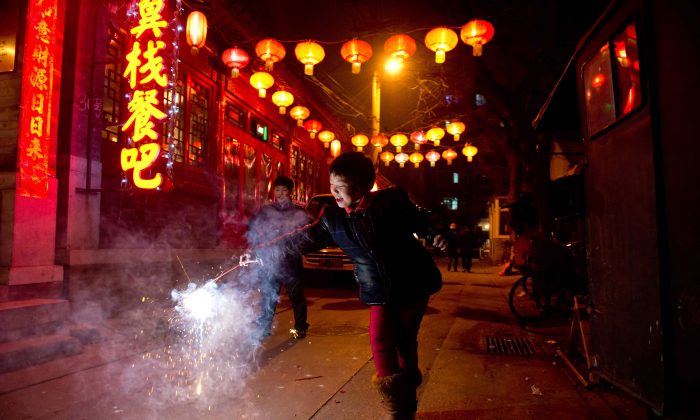 A girl holds a firecracker in an alleyway in Beijing during the Lantern Festival, which marks the end of celebrations for the Chinese New Year period. (Ed Jones/AFP/Getty Images)
China

The Chinese Lunar New Year, known as “Guo Nian,” is the most important and most celebrated traditional Chinese holiday. It has a very long history, going back about 17 centuries to the Yin-Shang Dynasty in the second millennium B.C., along the Yellow River. Many customs and legends have been passed down through the ages.

Among the customs are ceremonies for paying respect to the Gods—including the stove god—and also to one’s ancestors. Another custom is giving money in red envelopes to children. Two weeks later, the Lantern Festival ends the New Year celebrations with colorful lanterns hung in the streets.

Firecrackers are used to scare evil spirits away. According to legend, in ancient times a ferocious monster lived at the bottom of a deep lake. Every New Year’s Eve, it would climb onto land to feed on livestock, hurt or kill humans, and wreak havoc in a village near the lake. Therefore, every New Year’s Eve, the villagers would climb a mountain to escape the monster.

One year, when the villagers were busy preparing for their annual mountain exodus, an old beggar, a stranger to the village, came by. No one paid attention to him, as everyone was busy packing belongings and rushing to get their cows and sheep herded away.

One kindly old woman gave the beggar some food and told him to hurry to the mountain to stay safe from the monster. The beggar was unperturbed. He told the woman that he would get rid of the monster if she would let him stay at her house for the night.

The woman thought the old beggar was joking and kept urging him to go to the mountain, but the man just shook his head. So the woman let the beggar stay at her home, and then she went up the mountain with the rest of the villagers.

At midnight, the monster came as usual. It roamed through the dark and deserted village. There was only one light, and it shone from the old woman’s house. Some red paper was hung on the door.

The monster headed for the light. When it was almost at the door, a barrage of firecrackers exploded in its face, scaring him abruptly. Then the door opened, and the old beggar, all dressed in red, stood in the lit doorway. The terrified monster turned and run away.

When the villagers returned the next day, they were surprised to find the village undamaged. The old woman learned from the beggar what had transpired during the night. The villagers gathered around her house, looked at the red paper tacked to the door, and the remains of the firecrackers and candles.

Everyone was happy and excited that they safely passed into the New Year. They went home, dressed in their best clothes and had a grand celebration.

From then on, every New Year’s Eve, the villagers put red couplets—New Year blessings—on their doors, lit firecrackers, and kept candles burning through the night. The following morning, everyone would visit friends and family and celebrate.

Firecrackers are considered a good way to destroy evil. The Gods in the Heavens are said to also use them. The custom of lighting firecrackers has widely spread to become the most popular Chinese New Year’s tradition.

No Chinese New Year’s celebration would be complete without delicious food. There is a Chinese saying, “the best food is the dumpling.” Dumplings are a must-have on New Year’s, and they too have a long history.

There are many folk tales about the dumpling. One of them states that since ancient times, people have offered dumplings as a token of respect and gratitude to Pan Gu, the God who created Heaven and Earth and ended the darkness at the dawn of time.

Another legend is about the goddess Nu Wa who is said to have created humans from clay. It was a cold winter day, and the newly created humans’ ears would easily freeze and break off. Nu Wa used special thread to fasten the ears to the new human beings and asked others to help by biting on the other end of the thread.

Every year thereafter, when the cold weather set in, legend has it that people would bite into a dumpling hoping that this would prevent their ears from freezing and breaking off.

People in northern China eat dumplings on New Year’s Eve at the stroke of midnight, the start of the New Year. This is the moment for the New Year dumpling, served with dumpling soup.

Making great dumplings is time-consuming and an art. People say that today dumplings are not what they used to be; they are made by machine since everyone is too busy to make them by hand. To taste a really good, hand-made dumpling is not so easy to experience anymore!