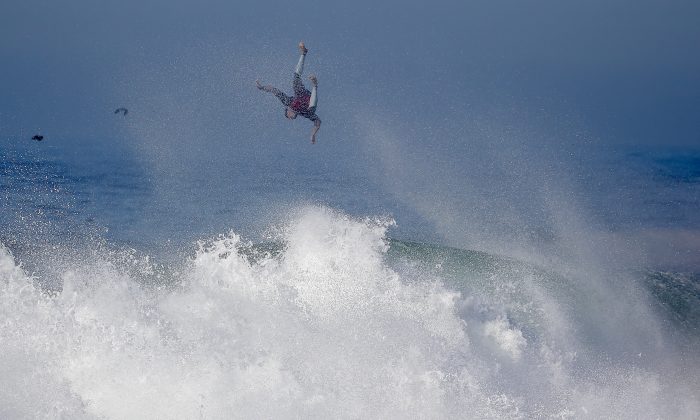 A surfer flies off a wave at the wedge in Newport Beach, Calif., Wednesday, Aug. 27, 2014. Southern California beachgoers experienced much higher than normal surf, brought on by Hurricane Marie spinning off the coast of Mexico. (AP Photo/Chris Carlson)
US

An offshore hurricane created what surfers are calling “epic” conditions for surfing in Southern California on Wednesday, with waves up to 25 feet high. That’s about four times the normal height for the region, according to Surfline.

About 100 miles of California coastline from Santa Barbara to Los Angeles and farther south to Long Beach were under a high surf advisory from the National Weather Service Wednesday. The huge waves, the largest in years, were a side effect of Hurricane Marie, just off the western coast of Mexico.

Powerful, and potentially deadly, rip currents were also in effect, especially near Santa Barbara. The high waves and strong undercurrents are expected to taper off through Friday.

Though surfers and curious onlookers were out in droves throughout the day, some coastal residents had to deal with minor flooding.
In the Southern California shore community of Seal Beach, rising seawater inundated a low-lying street early Wednesday. Several homes and garages were flooded after water cleared a 2 1/2 foot wall along several blocks of an oceanfront street, said police Sgt. John Scott.

“I was getting ready with the sandbags, but it was too late when I tried to put them up,” she said.

On social media sites such as Twitter, Instagram, and YouTube, users were busy throughout the day posting photos and video of massive waves with walls of surfers riding them.

Lifeguards were working overtime to protect surfers from the unusually powerful waves and currents.

At The Wedge in Newport Beach, a famous surfing spot, lifeguards with flippers and rescue batons at the ready patrolled the edge of the water and two rescue boats kept an eye on the dozen or so brave souls in the water. An ambulance was on standby.

The waves pose a serious challenge to be the biggest wave event at The Wedge since 1997, when Hurricane Linda produced monster swells, said Tim Burnham, who’s making a documentary about the famed surfing locale.

“This is the stuff that you dream of: rainbows, unicorns, Southern Hemi swells, hurricane swells,” he said as he dried off from a session in the waves just as things were getting started on Tuesday.

Burnham warned that it’s best to be cautious, regardless of the rare chance to ride such huge waves. Even for experienced surfers like him, he said “a healthy dose of fear” is a must.

“You know, you don’t want to be stupid. You’re here to push yourself, but at the end of the day you want to go home to your family,” he said.

Some 60 miles to the northwest in Malibu, a surfer was pulled unconscious from the water at Surfrider Beach on Tuesday and later died at a hospital, authorities said. It was not clear whether the death was related to the surf and may have been from a medical condition, Kyle Daniels, a Los Angeles County lifeguard captain, told the Orange County Register. Malibu Pier was closed after a piling was knocked loose Tuesday in big waves.