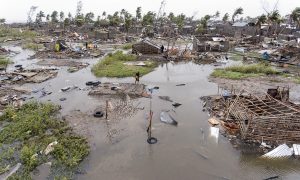 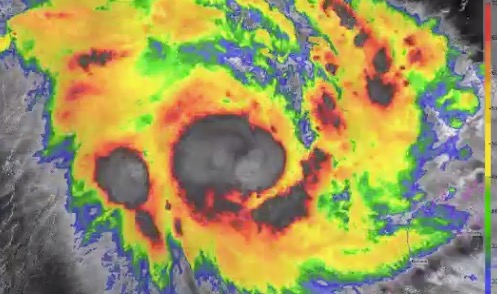 Tropical Cyclone Veronica has intensified to a Category 4 storm and is heading for Western Australia’s Pilbara Coast with the potential to turn into a Category 5 cyclone before landfall, the Bureau of Meteorology said on March 21.

The bureau says the region could be severely impacted over the weekend.

⚠️ Severe Tropical Cyclone Veronica continues to intensify! This loop shows it develop from a Category 1 to Category 4 over the last 24hrs! ???? It will approach the Pilbara coast during the weekend. Keep up to date with the latest at https://t.co/L0mHbEKftg #CycloneVeronica pic.twitter.com/sjqPImFnQz

Overnight on March 20, Veronica was well north of the Pilbara Coast but was moving southwest. It is expected to intensify on Friday, March 22.

“There is still some uncertainty in the forecast track but there is the potential for a severe tropical cyclone impact along the Pilbara Coast over the weekend,” a BOM alert said.

Gales with gusts up to 100 kilometres per hour are expected between Pardoo and Mardie from as early as Friday night, March 22.

Warning issued for Pilbara coast as Severe Tropical Cyclone Veronica (Category 4) tracks towards the coast. A severe impact along the Pilbara coast is likely over the weekend. #CycloneVeronica https://t.co/B1MVXBYXhh pic.twitter.com/lt3VK5lpdU

Very destructive winds with gusts over 165 kilometres per hour are possible as the cyclone nears the coast, as well as heavy rain, major flooding, and possible storm surges. Excessive high tides are expected as the cyclone is expected to make landfall at the height of the spring tide.

People near Mardie and Pardoo, including Port Hedland, South Hedland, Wickham, Roebourne, Point Samson, Karratha, and Dampier are being warned to prepare for cyclonic weather.

The Department of Fire and Emergency Services has issued a blue alert of Karratha, Port Hedland, and the surrounding towns, and have urged people to prepare their emergency survival kits.

Supermarket shelves in the Port Hedland region have already been cleared out by residents preparing for the storm, including bottled water supplies.

The local Woolworths told The West that its next delivery of water is expected on Saturday morning at the latest.

“We’re pretty stocked on most things, but the water has gone AWOL,” a Woolworths spokesperson told The West.

Stores in Hedland run out of water ahead of Cyclone Veronica

BHP told The West that it had sent home all non-essential fly-in fly-out employees from Port Hedland and was clearing the port as it prepared to close on March 22.

“Safety is our top priority and we continue to monitor the movement of the cyclone,” a representative told The West. “As a precautionary measure, the ports of Cape Lambert and Dampier are being cleared. All other operations are continuing, subject to ongoing monitoring of weather conditions.”

The bureau’s State Manager James Ashley told The West that they have already seen wind gusts of around 250 kilometres per hour from Veronica.

“With the coastal crossing expected over the weekend and the cyclone remaining as a severe system the rainfall totals will be very high, we are talking hundreds of millimetres, and it is fairly slow moving so that makes rainfall even heavier,” he said.

“That will lead to flooding through those coastal areas in particular.

“As it approaches the coast, depending on the tidal movement, it can create very dangerous storm surges as well which again can lead to flooding of coastal areas.”

The last Category 5 system to hit the Pilbara Coast was Cyclone George in 2007, which killed three people and caused $8 million worth in damages in the Port Hedland region, The West reported.

Meanwhile, in the northeast, Cyclone Trevor has triggered mass evacuations as the currently Category 1 cyclone is forecast to gain momentum to become a Category 4 as it travels across the Gulf of Carpentaria headed for the east coast of the Northern Territory.

Here’s a satellite pic of #CycloneTrevor, now a Category 2 system in the Gulf of Carpentaria. It’s a very large TC, with gale force winds extending 200-300km from its centre. It’s expected to intensify to Category 3 overnight, and Category 4 on Friday. https://t.co/aW8HS4xVs7 pic.twitter.com/s4CBGyoBh6

“It’s a very large tropical cyclone, with gale force winds extending 200-300 kilometres from its centre. It’s expected to intensify to Category 3 overnight, and Category 4 on Friday,” the bureau said on March 21.

The bureau is predicting that the cyclone will make landfall between Borroloola and Groote Eylandt on March 22 as a Category four severe tropical cyclone.

The evacuations are the largest since cyclone Tracy in 1974.

AAP contributed to the report.