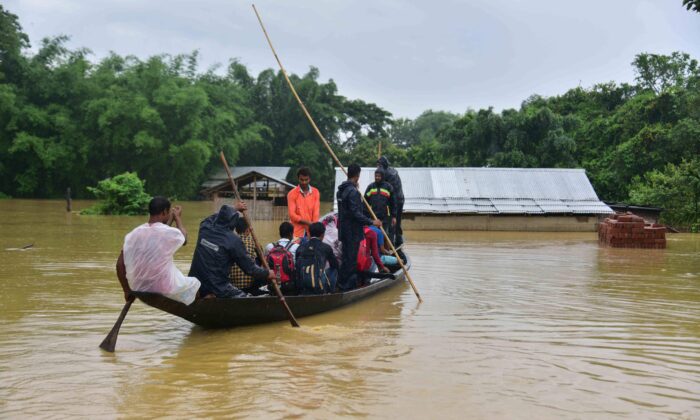 Heavy monsoon rains have flooded parts of Bangladesh and India, killing at least 41 people and leaving millions more stranded as their homes have been submerged, authorities said on June 18.

At least nine people, including two children, were killed in India’s Assam state, and 2 million others lost their homes in the flood. Two people were reported missing in Hojai and Sonitpur districts, Outlook India reported.

The Brahmaputra River, one of Asia’s largest rivers, breached its mud embankments, inundating 3,000 villages and croplands in 28 of Assam’s 33 districts. The rain is expected to continue until June 19.

Assam’s chief minister Himanta Biswa Sarma said the Water Resources Ministry and Irrigation Department would hasten construction of a new alignment of the mud embankment when the flood water recedes.

Indian Prime Minister Narendra Modi contacted Sarma on Saturday to inquire about the flood situation there and promised the state “all help from the Central government.”

“Earlier today, spoke to Assam [chief minister] and took stock of the situation due to floods in the state. Assured all possible support from the centre. I pray for the safety and well-being of the people of Assam affected by flooding,” Modi said in a tweet.

Lightning in parts of neighboring Bangladesh killed at least 21 people on Friday, including three children aged between 12 and 14.

Water levels in all major rivers across the country were rising, according to the flood forecasting and warning center in the capital city of Bangladesh, Dhaka. The country has about 130 rivers.

The center said the flood situation is likely to deteriorate in the worst-hit Sunamganj and Sylhet districts in the northeastern region as well as in Lalmonirhat, Kurigram, Nilphamari, and Rangpur districts in northern Bangladesh.

Last month, a pre-monsoon flash flood, triggered by a rush of water from upstream in India’s northeastern states, hit Bangladesh’s northern and northeastern regions, destroying crops and damaging homes and roads. The country was just starting to recover when fresh rain flooded the same areas again this week.