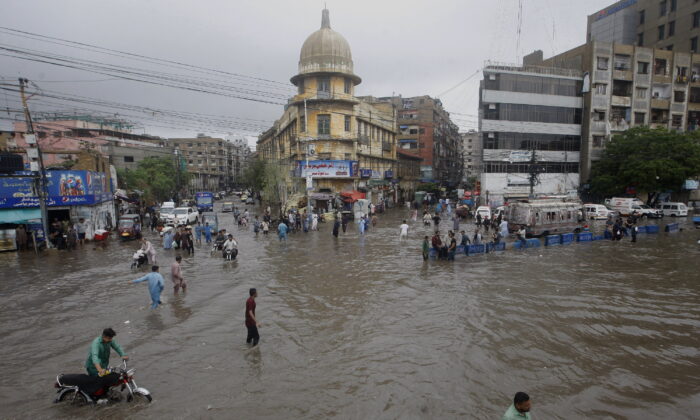 Motorcyclists and people wade through a flooded road in a business district after a heavy rainfall in Karachi, Pakistan, on July 9, 2022. (Fareed Khan/AP Photo)
Asia & Pacific

KARACHI, Pakistan—Monsoon rains over the past month have killed at least 150 people as downpours continue to lash Pakistan, triggering flash floods in some parts of the country, government officials said Monday.

The National Disaster Management Authority said 91 women and children are among the dead so far. The monsoon rains also damaged homes, roads, five bridges, and power stations across the country. At least 163 people were also injured in rain-related incidents since June 14, it said in a statement. Heavy rains and flash floods fully or partially damaged more than 1,000 houses across the country.

The situation was particularly dire in the major southern port city of Karachi, the country’s largest, where entire neighborhoods were submerged. Commuters were left stranded in places or attempting to wade through knee-deep water on foot or on bicycles. Some residents arranged for boats to move them to safer places.

“At the moment, the situation is like this that we need to travel by boat rather than in vehicles as the roads are flooded,” said one resident, Abdul Raheem.

Other Karachi residents said they were forced to abandon their cars on submerged roads and walk through waist-high water. Authorities summoned paramilitary troops and the Navy to help with efforts to drain the waters from flooded streets and evacuate people.

The rains are said to be almost twice as heavy as the average downpour at this time of the year. They started in mid-June, initially causing havoc in southwestern Baluchistan province, where 65 people have died so far.

Authorities are delivering tents, food, and other essential items to hundreds of rain-affected people in the north and southwest.