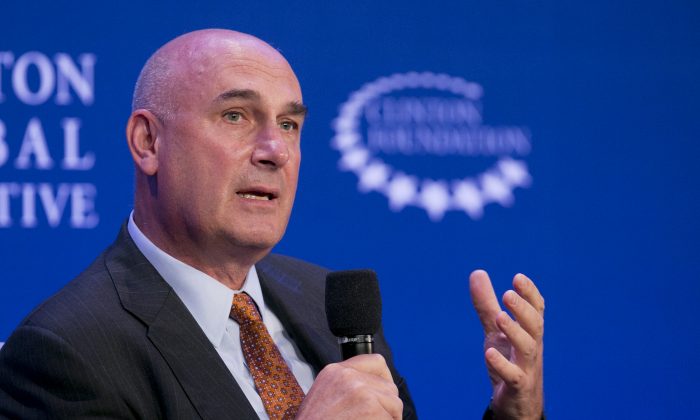 Agro-giant Monsanto declined a $62 billion acquisition offer from German chemical superpower Bayer as “incomplete and financially inadequate” on May 24.

Bayer’s offer of $122 per share could have been seen as generous, given Monsanto’s stocks trade at about $109, according to marketwatch.com. Moreover, Monsanto’s stocks have soared by some 20 percent in the last 2 weeks, after news of Bayer’s bid emerged. Before that, it traded at around $90.

That, however, didn’t faze Monsanto’s Chairman and CEO Hugh Grant.

“[T]he current proposal significantly undervalues our company,” he said in a May 24 statement. He also cited lacking “reassurances” for potential financing and regulatory risks.

Yet, the company “is open to continued and constructive conversations to assess whether a transaction in the best interest of Monsanto shareowners can be achieved,” the statement reads.

Monsanto also stated that its Board of Directors “has not set a timeline for further discussions.”

Bayer addressed Grant’s concerns in its bid, saying it plans to borrow some $47 billion to finance the acquisition and produce the rest through equity, primarily by issuing new shares.

Addressing the regulatory risks, Bayer expressed confidence it can obtain regulators’ approval of the deal, given its rich acquisition history.

Yet the company has never attempted a takeover of this magnitude and the market has reacted negatively to the proposed deal.

“The disclosed price is at top end of the limit and just about works out,” said Markus Manns, who oversees almost $300 million at Union Investment GmbH, including Bayer shares, according to Bloomberg. “Should it rise any further, which appears probable, the takeover will become increasingly unattractive.”

Bayer’s stocks lost some 15 percent since news of the deal surfaced 2 weeks ago and only recovered slightly on Tuesday—right after Monsanto released its negative answer to the bid.

The takeover would allow Bayer to become the largest agro-chemical company in the world, according to Bloomberg, facing two major consolidations in the sector in recent months.

Bayer, based in Leverkusen, Germany, has more than 150 years history. It is perhaps best know for introducing aspirin to market and trademarking its name—although its U.S. trademark was confiscated by the government during World War I. It is perhaps less known that Bayer also introduced heroin to market and trademarked the name as a cough medicine. With the help of a series of acquisitions, it became one of the major pharmaceutical companies in the world. It also produces a line of pesticides, which, it says, will fit with Monsanto’s offerings.

Monsanto, based in St. Louis, is one of the world’s largest agrochemical and biotechnology companies. It has been a frontrunner in the genetic modification of plants, as well as the main target for the anti-GMO movement. Its best known product—Roundup, a glyphosate-based pesticide—is the most commonly used pesticide in the United States.