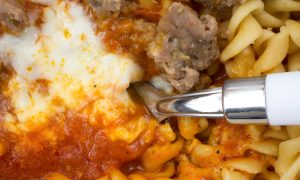 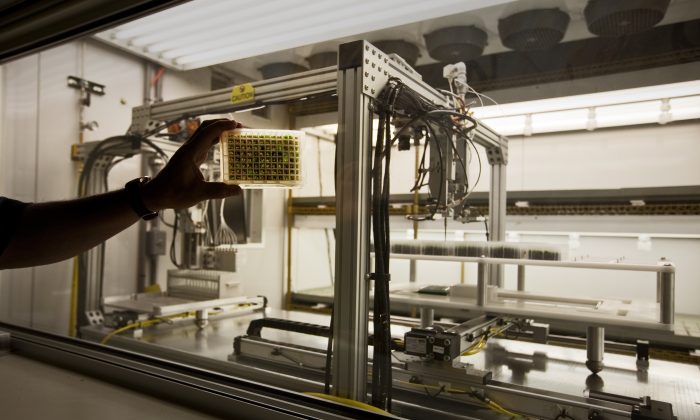 A machine at the Monsanto headquarters is used to test various dosages of Round Up herbicide on weed seedlings grown in a biotechnology lab in St Louis, Mo., on May 21, 2009. (Brent Stirton/Getty Images.)
Environment

The World Health Organization said Monsanto’s widely used herbicide Roundup is a carcinogen. The label raises new questions, both about industrial farming practices and about an aerial spraying program in Colombia meant to eradicate cocaine plants. Monsanto has rejected the finding.

The International Agency for Research on Cancer, a French-based research arm of the World Health Organization, on March 20 reclassified glyphosate as a carcinogen. The agency cited what it called convincing evidence that the herbicide produces cancer in lab animals and more limited findings that it causes non-Hodgkin’s lymphoma in humans.

In Colombia, the United States pays for aerial spraying of glyphosate on coca crops. More than 4 million acres have been sprayed.

The fumigation program, which is partly carried out by American contractors, long has provoked hostility from Colombia’s left, which likens it to the U.S. military’s use of the Agent Orange herbicide during the Vietnam War. Monsanto and other companies manufactured Agent Orange. Leftist rebels, currently in negotiations with the government to end a half-century conflict, are demanding an end to the spraying as part of any deal.

Daniel Mejia, a Bogota-based economist who is chairman of an expert panel advising the Colombian government on its drug strategy, said the report is by far the most authoritative evidence and could end up burying the fumigation program.

“Nobody can accuse the WHO of being ideologically biased,” Mejia said, noting that questions had already been raised about the effectiveness of the spraying strategy and its potential health risks.

Studies published in medical journals going back at least to the 1980s found that glyphosate, the active ingredient in Roundup, was likely to be toxic. But the IARC March 20 statement was new.

Monsanto rejected the IARC’s conclusions. In a statement issued the same day as the new classification, it criticized the findings, saying they were selective, biased, nothing new, and failed to establish a link between glyphosate and cancer.

“We don’t know how IARC could reach a conclusion that is such a dramatic departure from the conclusion reached by all regulatory agencies around the globe,” said Dr. Philip Miller, vice president of global regulatory affairs for Monsanto, in a statement. He said the “The one thing about true science is that it is not selective. Unfortunately, this review does not meet the standards used by respected agencies around the world.”

Monsanto has a long history of minimizing the harm of its products.

It produced PCBs, an industrial cooling agent that is toxic, and its behavior was cavalier. “They also know that for nearly 40 years, while producing the now-banned industrial coolants known as PCBs at a local factory, Monsanto Co. routinely discharged toxic waste into a west Anniston creek and dumped millions of pounds of PCBs into oozing open-pit landfills,” reported the Washington Post.

Glyphosate is intricately connected to Monsanto’s program of developing genetically modified food crops. It has developed what are called “Roundup-Ready” crops, which survive if they are sprayed with glyphosate.

If the chemical were to be banned, it would jeopardize the value of those genetically modified crops.