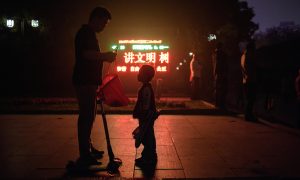 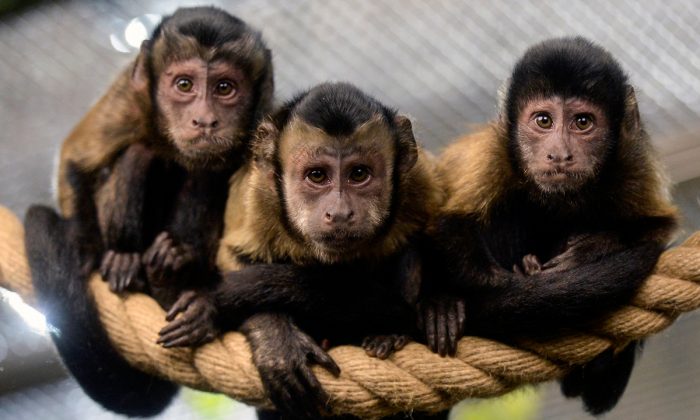 Monkey Surprises Itself When It Uses a Tool on Its Enclosure Window: Video

Monkeys using tools is no new discovery, but the way this one did may be a first for the camera.

A capuchin was seen using a small rock to shatter an enclosure wall made of tempered glass, frightening itself and surprising the guests who were watching it, according to Chinese online news outlet The Paper.

Other than a brief scare, the monkey was unharmed. The video was recorded in a zoo in Zhengzhou City of China’s Henan Province on Aug. 20.

Video shows the monkey standing near the large glass walls of its enclosure, where it immediately raises a stone in its hands above its head. It bashes on the window once, looks up, and then strikes once more, fracturing the entire glass panel.

Immediately it skitters away, while onlookers also express their surprise.

An employee at the zoo named Zu Xuanke explained the monkey’s situation.

“This monkey will often uses tools, like for breaking open walnuts,” Zu told The Paper. “We usually have things like little rocks inside the enclosure, but it has never hit the glass.”

Other glass panels in the background of the video can be seen, some of them also shattered in the similar way. The report did not clarify if the rock wielding capuchin was responsible.

“To us, this is a really odd thing to happen to us this time, since we’ve been raising it for many years,” Zu told The Paper. “It’s never smashed [the glass].”

He went on to say that this was a new development in the monkey’s behavior.

“This time it took a large rock out of the ground, carried it over and smashed [the glass],” Zu told The Paper.

The broken glass did not harm any guests, according to the news outlet.

Zu mentioned that the monkey was not injured either.

“First of all, this monkey’s body is very small, and we have tempered glass,” Zu told The Paper. “Even though the glass shatters in the video, but it didn’t fall over, and the monkey ran away.”