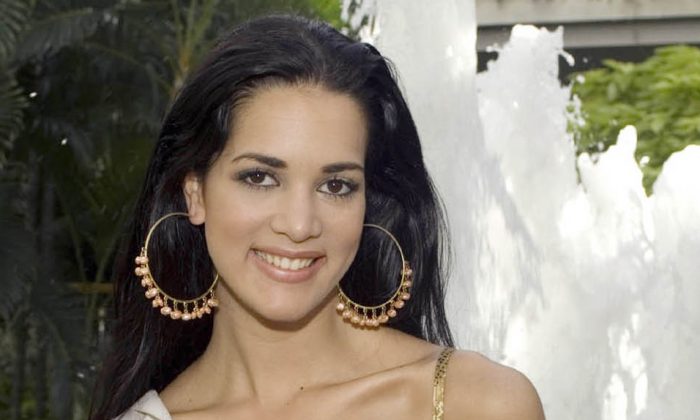 This May 23, 2005 file photo released by Miss Universe shows Monica Spear, Miss Venezuela 2005, posing for a portrait ahead of the Miss Universe competition in Bangkok, Thailand. Venezuelan authorities say the soap-opera actress and former Miss Venezuela and her husband were shot and killed resisting a robbery after their car broke down. Prosecutors said in a statement that Monica Spear and Henry Thomas Berry were slain late Monday, Jan. 6, 2014 near Puerto Cabello, Venezuela’s main port. (AP Photo/Miss Universe Darren Decker, File)
Americas

Another arrest was made in the murder of Monica Spear, the former Miss Venezuela, and her ex-husband, Thomas Henry Berry.

“Arrested by Poliyaracuy another of the individuals sought for the Murder of Monica Spear and Thomas Henry Berry #CICPC,” Jose Sierralta, the head of the country’s CICPC investigative police force, said on Twitter, according to EFE.

Seven other suspects were arrested in the case.

Berry and Spear were shot by robbers a week ago Monday after their car broke down on the highway in Carabobo state. The couple’s 5-year-old daughter was wounded.

Regarding the murders and Venezuela’s high murder rate, President Nicolas Maduro said there would be a meeting so that “in a month we may have concrete results in practice and in the formulation of a policy.”

Venezuela experienced more than 11,000 murders last year. However, the independent Venezuelan Violence Observatory said that more than 25,000 were likely murdered in 2013.

The parents of Berry, Carol and Thomas Berry, spoke publicly for the first time about their son’s death.

“He might have been pushing his luck taking his family where he did,” said Thomas Berry Sr., “but he wanted to show them the parts of Venezuela that people don’t usually see,” according to the Telegraph.

Carol said that she was surprised “to hear he had taken them along that road. We had expected them back into Caracas on Friday morning and were worried when they didn’t appear. We called, but he told us they were somewhere else and having a good time.”

She added: “He knew about the risks but he didn’t let it stop him. He was determined to do whatever he wanted.”

Hundreds of Venezuelans paid their final respects Friday to Spear.

Fellow artists and relatives of Spear, some holding pictures of the actress, formed long lines to bid farewell at a funeral in Caracas. Spear’s sister threw flowers to weeping fans.

While authorities swiftly arrested several suspects, the killings focused attention on President Nicolas Maduro over the government’s failure to bring down violent crime that has soared during more than 14 years of socialist rule.

So far Maduro’s response has been to extend an olive branch to the opposition, which he normally derides, and collect proposals for a united front to combat crime.

David Smilde, an analyst who has studied citizen security in Venezuela for the Washington Office on Latin America, said Maduro may also be seeking to take advantage of public outrage to roll back a civilian police reform started by the late President Hugo Chavez and instead expand the military’s role in policing the streets.