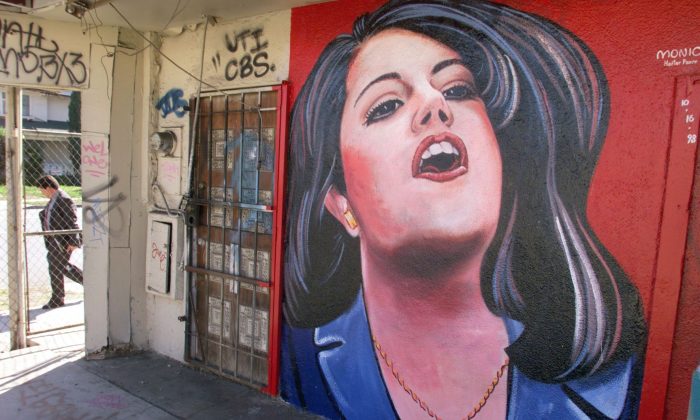 A man walks past a mural of former White House intern Monica Lewinsky in Los Angeles in this file photo. Lewinsky is coming out with a big article in Vanity Fair, to be published Thursday, May 8. (HECTOR MATA/AFP/Getty Images)
News

Monica Lewinsky and the Decline of Society

I was enjoying coffee and the New York Times when I was shocked, shocked, by Maureen Dowd just wailing on Monica Lewinsky with an editorial two-by-four.

Lewinsky, of course, is coming out with a big article in Vanity Fair, to be published Thursday. Nearly 20 years after her affair with President Bill Clinton, she said, “I’ve decided, finally, to stick my head above the parapet so that I can take back my narrative and give a purpose to my past,” according to an excerpt from the story.

Dowd said Lewinsky complained about the scathing columns back in the day, and then scathes all over again. Lewinsky said she would be willing to have a drink with her old critic, Dowd, and Dowd reacts with venom.

Why? Lewinsky and Clinton both crossed a line, but he gets to go around and give speeches and get honorary degrees, while her name has become a joke. I do feel a little sorry for her. It’s like some kind of 19th century George Eliot novel: One bad decision in her youth follows a woman (it has to be a woman) forever.

Lewinsky’s wish to get control of her story made me think of a letter I recall, to advice columnist Martin Luther King. Seriously, he had a stint as a Dear Abby in Ebony Magazine of the 1950s. It was called “Advice for Living.” He wrote it until September 1958, when his doctor advised him to lighten his schedule as he recovered from a nearly fatal stabbing.

One woman wrote King a letter saying she made a mistake when she was young, and “had a child out of wedlock.” The shame and stigma had followed her ever since. “I am the black sheep of my family and of the small town in which I live. How long must I pay for one mistake? Should I pick up and go to another town to live?”

King counseled her not to feel guilty or to become overly sensitive about her past. “This would be tragic.” He recommended that she “concentrate on the heights which you are determined to reach.”

Everything about that might as well come from a different world. People don’t bat an eye at children born out of wedlock in the 21st century. They also rarely seem determined to reach heights, and wise men don’t encourage them to aim for heights.

The other thing showing a different world is his gentle kindness. I realize that he was not an ordinary, run of the mill advice columnist. The tone of all his replies is calm and compassionate, and those qualities represent his ideals.

But there was a restraint in his generation that society as a whole has lost.

Anybody alive in the 1990s knows all about Lewinsky and Clinton, including stuff that used to be unprintable. I think if fewer details had been made public, Lewinsky might have had a better chance of getting on with her life.

I want restraint. I want taste. I want to take King’s advice and try to aim high. And I don’t see why people cannot just see Lewinsky as a person who did something unfortunate a long time ago when she was in her 20s.