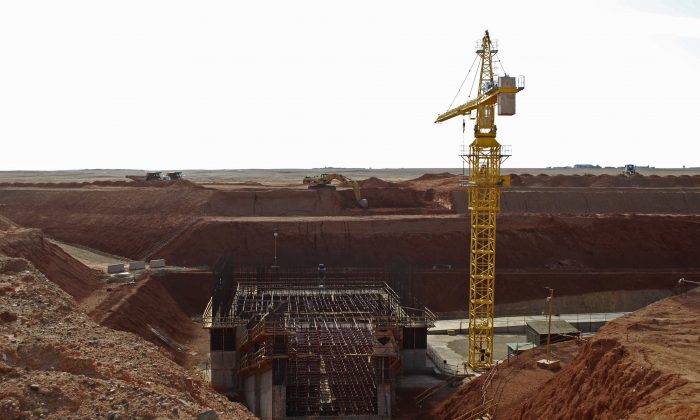 In this file photo, a crane hovers above the site of a new shaft under construction at the Oyu Tolgoi mine site in Khanbogd village, Umnugobi province, Mongolia, on Nov. 7, 2009. (AP Photo/Ganbat Namjilsangarav, File)
International

ULAANBAATAR, Mongolia—Mongolian lawmakers have told the government to revoke a private company’s purchase of a stake in a major copper mine, prompting the president to warn they might scare away investors as the country tries to reverse an economic slump.

The move highlights the political sensitivity of Mongolia’s copper, gold and other mineral wealth, the source of more than 90 percent of the North Asian country’s export revenues.

Legislators approved a resolution Friday calling on Prime Minister Jargaltulgyn Erdenebat to revoke a Mongolian investor’s $400 million purchase of a Russian state company’s 49 percent stake in Erdenet Mining Corp. They want the government, which owns the rest of Erdenet, to take full control.

Investor confidence has been shaken by previous disputes over the role of foreign mining companies and complaints too little of Mongolia’s mineral wealth makes its way to the poor majority.

Pressure to perk up the economy has mounted as weak global demand for Mongolia’s minerals dragged down growth to a 1.6 percent contraction in the latest quarter.

Mongolia’s national debt stands at about $23 billion, or twice annual economic output, and a $580 million payment to foreign bondholders is due March 21. Mongolian leaders are deciding whether to pursue a potential emergency loan from the International Monetary Fund.

Last week’s vote followed a change of government in June elections and a parliamentary inquiry that concluded the real buyer was a Mongolian bank that violated lending rules by hiding how much money it put up. It was the first time parliament has called for the government to take over a company since the end of Soviet-style communist rule in the early 1990s, when Mongolia sold off state assets.

Approval of the Erdenet sale was announced June 28 by then-Prime Minister Chimediin Saikhanbileg. But the next day, his Democratic Party lost control of parliament to the rival Mongolian People’s Party in national elections.

It was unclear whether Erdenebat was obliged to act on parliament’s demand, but President Tsakhiagiin Elbegdorj, a Democratic Party member, warned the vote might hurt the economy.

“The resolution could drive away foreign investors and entrepreneurs” and “further isolate Mongolia,” Elbegdorj said in a statement.

Still, Elbegdorj said authorities should root out the “hidden and illegal business operations” of Erdenet.

Earlier, global miner Rio Tinto Ltd. delayed development of a gold and copper mine, Oyu Tolgoi, due to disagreements over revenue sharing and the foreign role in mining.

After that dispute was settled, Rio Tinto announced last May it was ready to go ahead with a $5.3 billion expansion. Saikhanbileg said that showed Mongolia was “back to business.”

Erdenet, Mongolian for “Treasure,” operates a mining complex about 150 miles (240 kilometers) northwest of the capital, Ulan Bator. Until last year’s sale, it was one of Russia’s biggest assets in Mongolia.

Controversy over the sale was fueled by complaints a Mongolian bank, Trade Development Bank LLC, was the real buyer and violated lending rules by financing the acquisition.

The purchase was led by a 28-year-old lawyer, Tsooj Purevtuvshin, owner of Mongolian Copper Corp. Purevtuvshin, also known by the nickname Tush, said MCC bought Erdenet using financing from a group of investors.

However, a report by parliament concluded the money came from TDB, which put up $354 million, and a bank owned by a TDB shareholder, which put up $55 million.

That violated rules that should have limited TDB to lending about $70 million, according to Jargalsaikhan Dambadarjaa, an economist and journalist.

Parliament also found the central bank lent money to a company in Purevtuvshin’s investment group without official approval. The central bank governor at the time was a former TDB board member.

Purevtuvshin denied violating financial rules and said only about $75 million came from TDB.

“We strongly reject these findings and action by parliament,” he said in a phone interview.

TDB’s chairman and CEO, Orkhon Onon, also denied wrongdoing. In a written statement, he said his bank’s role was limited to “partial financing” and investment advice.

“All the allegations made against TDB by the parliamentary working group are misleading, baseless, politically motivated and deliberately fabricated,” said Orkhon’s statement.

“The government must protect both private and public property,” he said.