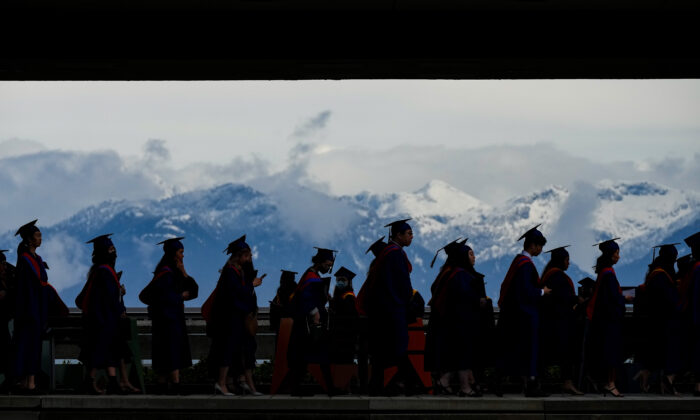 Graduates are silhouetted against the mountains as they line up for a spring 2020 convocation ceremony at a university in Burnaby, B.C., on May 6, 2022. (The Canadian Press/Darryl Dyck)
Canada

Some international students are implicated in money laundering activities for organized criminal networks operating in Canada, according to the Financial Transactions and Reports Analysis Centre of Canada (FINTRAC), which named students from China and Hong Kong.

The report noted that IVTS are often affiliated with and operated within overseas diaspora communities that send and receive legitimate funds between community members and expatriate workers. However, it is also susceptible to misuse by criminal groups, particularly for moving funds between restricted and unrestricted jurisdictions.

“China and Iran, for example, are subject to these restrictions and have long established diaspora communities in Canada, particularly in Metro Vancouver and the Greater Toronto Area, that have traditionally made use of IVTS,” the report said.

“The need for diaspora communities to access funds due to currency controls or sanctions accounts for the demand.”

One of the various clandestine techniques criminals used to launder money is through the use of “money mules,” which refers to individuals who transfer funds or the proceeds of criminal activity on behalf of a criminal organization or money launderer. The individuals may or may not be knowingly working for the money laundering network.

“A number of suspected ‘money mules’ are international students receiving wire transfers from individuals and entities in China and Hong Kong as well as email money transfers and bank drafts from third parties in Canada,” the FINTRAC report said. “These funds appear to flow through personal and business accounts with little information on the source.”

In addition to students, homemakers, unemployed persons, seniors, and migrant labourers are frequent targets for money mule recruitment, according to the agency. Suspected money mule accounts received a high volume of third-party cash deposits and email money transfers that do not align with the client’s profile.

“These funds were rapidly depleted, primarily via outgoing email money transfers and bank drafts to unrelated third parties. These funds were also used to purchase investments, real estate, and vehicles being shipped to West Africa and Asia,” the report said.

FINTRAC also warned that “victims of fraud can be exploited or coerced into being money mules. Criminals can use the victim’s bank account for the placement and transfer of illicit funds.”

The agency’s warnings of foreign students’ involvement in money laundering were based on an “analysis of suspicious transaction reports” under the Proceeds Of Crime And Terrorist Financing Act.

The report also warned of the money laundering technique known as “cuckoo smurfing,” a term derived from the cuckoo bird, which lays its eggs in the nests of other birds, tricking the host into raising its young.

“Cuckoo smurfing is a technique professional money launderers use to make criminal proceeds appear to have come from legitimate sources and to transfer funds across jurisdictions,” it said.

“This technique leverages the bank accounts of multiple unwitting third parties to facilitate deposits of cash derived from criminal activity. The bank accounts usually belong to individuals and businesses in diaspora communities who are expecting remittances.”

FINTRAC found that many individuals implicated in the practice appeared to be co-mingling their personal and business account funds related to money services business (MSB) activity. These individuals often owned convenience stores, holding companies, construction and general contracting companies, and import-export businesses, which shared addresses or telephone numbers with MSBs.

“Some money services business operators may be misrepresenting the nature of their business to financial institutions in order to access financial services,” the report said, adding that oversight entities have reported transactions that “do not align with the stated nature of the business.”

These businesses may be front or shell companies, FINTRAC said, noting that such businesses are concentrated in metro Vancouver and the GTA.

“FINTRAC suspects that these businesses may be front companies or shell companies used to receive cash proceeds of crime and illicit funds from jurisdictions identified as high-risk for money laundering and financing of terrorist activities. A number of these businesses received funds from entities connected to organized crime, drug trafficking or law enforcement investigations into money laundering and sanctions evasion,” the report said.

“Suspicious transactions highlighted a general flow of funds from Iran and China, primarily through the United Arab Emirates, Hong Kong and Qatar, to these Canadian entities. In turn, these entities transferred the funds to multiple individuals and entities in Canada through bank drafts, cheques and account transfers.”