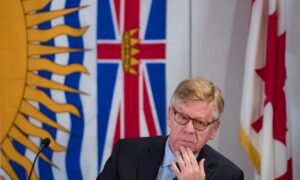 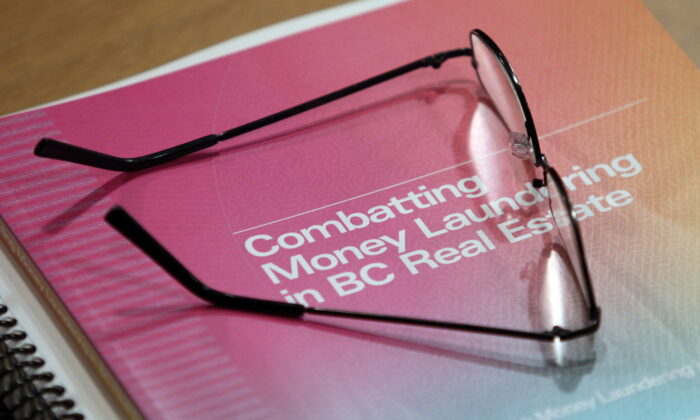 Glasses rest on a copy of Peter German's report into money laundering in the B.C. real estate industry during a press conference at the legislature in Victoria, B.C., on May 9, 2019. (Chad Hipolito/The Canadian Press)
Canada

The British Columbia money laundering inquiry heard testimony this week about how drug traffickers and loan sharks have moved money between Vancouver, Latin America, and Asia through underground Chinese banks.

Although criminal charges against Jin and Silver International were stayed in November 2018, Chizawsky said Jin and his “Vancouver Model” money laundering network are under another ongoing RCMP probe called E-Nationalize, Global News reported.

According to Chizawsky, the E-Pirate probe reviewed cellphone data that indicated Silver International had access to “cash pools” in numerous locations, including China, Mexico City, and Bogota. Records and videos seized in 2015 from Silver International, an unregistered currency exchange, also showed that the business received $220 million that year and paid out $217 million worldwide.

While tailed by the RCMP, Jin allegedly took large bags of cash he picked up from Silver International to his parents’ home in Richmond, where he broke it into smaller amounts, then took the cash to his own illegal casino mansion, also in Richmond.

Chizawsky said Jin was arrested in February 2016, and when interviewed, he admitted that he had gambling credit accounts at casinos in Las Vegas and Macau, according to Global, and that he used the accounts to run his own gambling business with Chinese nationals.

Jin admitted running a casino at his Richmond mansion, but denied any criminality.

“The small casino—I’m innocent too. I lose my money too,” Jin said, according to an RCMP interview transcript read at the inquiry, as reported by Global.

The RCMP connected Jin’s network to massage and restaurant businesses in Toronto and other areas, including cities in China.

Chizawsky said Jin denied extorting any of his loan clients, although he did refer to himself as a “loan shark.” Xin has been convicted for aggravated assault, sexual assault, and sexual exploitation, he said.

Jin’s lawyer, Greg DelBigio, questioned the accuracy of the affidavit and testimony given by Chizawsky, who has acknowledged inaccurate attribution of information in at least one case.