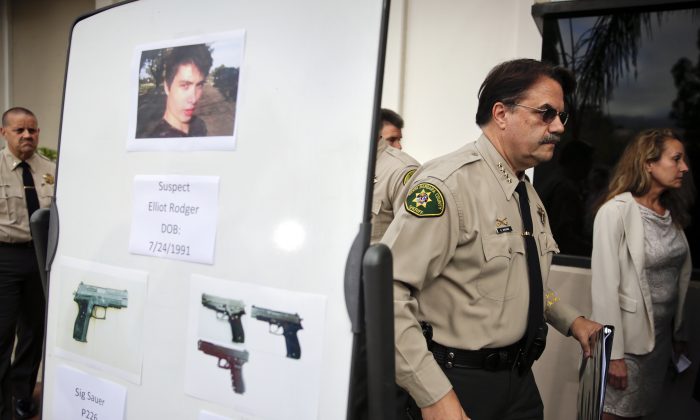 Santa Barbara County Sheriff Bill Brown, right, walks past a board showing the photos of suspected gunman Elliot Rodger and the weapons he used in Friday night's mass shooting that took place in Isla Vista, Calif., after a news conference on Saturday, May 24, 2014, in Santa Barbara, Calif. Sheriff's officials say Rodger, 22, went on a rampage near the University of California, Santa Barbara, stabbing three people to death at his apartment before shooting and killing three more in a crime spree through a nearby neighborhood. (AP Photo/Jae C. Hong)
US

Monette Moio, an actress, was singled out by Isla Vista, Calif., killer Elliot Rodger in his “manifesto.”

‘She must have thought I was the ultimate loser. I hated her so much, and I will never forget her. I started to hate all girls because of this. I saw them as mean, cruel, and heartless creatures that took pleasure from my suffering. The way I was treated by girls at this time, especially by that evil b–ch sparked an intense fear of girls,” he said, referring to Moio. “The funny part of this is that I had a secret crush on [her]. She was the first girl I ever had a crush on, and I never admitted it to anyone. To be teased and ridiculed by the girl I had a crush on wounded me deeply. The world that I grew up thinking was bright and blissful was all over. I was living in a depraved world, and I didn’t want to accept it. I didn’t want to give any thought to it.”

The father of Moio, John Moio, told the Daily Mail that he’s devastated that she was mentioned in the manifesto.

“She was ten years old for God’s sake – she can barely remember the guy,” he told the paper. “He’s a sociopath. She hasn’t seen him since school. She’s devastated over the whole thing. It’s like she’s being implicated in this terrible tragedy for something she hasn’t done and can’t remember.”

Moio asked, “How is a ten-year-old girl going to bully a 12-year-old boy? My daughter was not a bully, she’s one of the sweetest people you could ever meet.”

Three students were stabbed to death, three were fatally shot, and 13 others were wounded Friday night in the attack by Elliot Rodger, 22, a community college student who had posted an Internet video outlining his plan to slaughter as many people as possible.

Rodger had legally obtained three semi-automatic handguns and still had 400 unspent rounds of ammunition when he shot himself to death, authorities said.

Sharon Tam, a sociology major from El Monte, said it was a depressing situation.

“I just feel like more insecure, I guess. And I really feel unsafe walking around IV,” she said, referring to Isla Vista, the unincorporated off-campus community where many students live.

“I did not like expect this in my life at all to ever occur. Especially like in my community,” she said. “I just thought we were all just happy people, I guess.”

Thousands mourned the deaths at the memorial service.