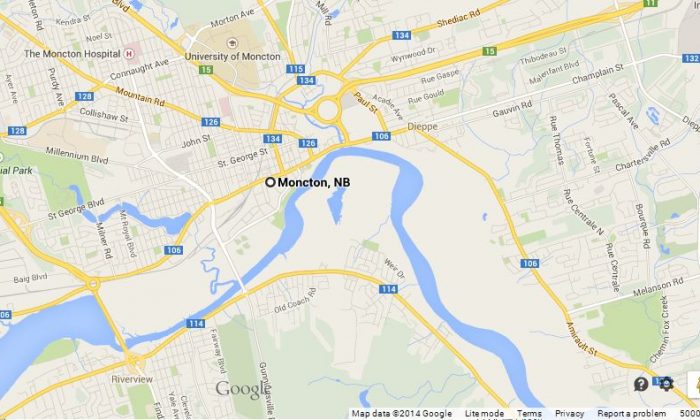 Moncton, Canada: Gunman on the Loose After Shooting Near Coliseum; Justin Bourque ID’d as Suspect (+Photos)

A gunman is on the loose on Wednesday night after shooting people near the Moncton Coliseum in Canada.

RCMP New Brunswick told residents in the area, including the Worthington, Preston, and Elmurst areas, to stay inside and lock their doors.

They also alerted motorists to avoid the Trinity/Plaza Boulevard area due to the shooting.

An unknown number of people were shot, though TMH has received two patients with gunshot wounds and a friend with the RCMP told local Will Njoku that three officers were killed by the shooter.

RCMP said via Twitter that two Mounties were shot and were taken to the hospital with life-threatening injuries while three others were mortally wounded.

Employees of a grocery store lock down their store in Moncton, New Brunswick, on Wednesday, June 4, 2014. Police in New Brunswick were searching Wednesday for an armed man after at least two people, both police officers, were injured in a shooting. The Royal Canadian Mounted Police in New Brunswick said on its Twitter feed that they were looking for 24-year-old Justin Bourque of Moncton who is considered armed and dangerous. The police force tweeted an image of a suspect wearing military camouflage and wielding two guns. (AP Photo/The Canadian Press, Marc Grandmaison)

Royal Canadian Mounted Police officers use their vehicles to create a keep a perimeter in Moncton, New Brunswick on Wednesday June 4, 2014. The RCMP in New Brunswick said an undisclosed number of people have been shot and a manhunt is underway in the north end of Moncton for a man armed with guns.(AP Photo/The Canadian Press, Marc Grandmaison)

The RCMP later said that the suspect has been identified as 24-year-old Justin Bourque of Moncton. Anyone with information should call 911.

Joan MacAlpine Stiles, who saw the man pass through her backyard, told CBC: “He looked like Rambo.”