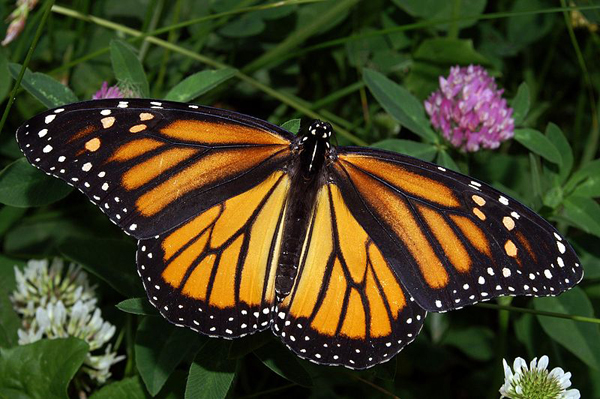 Monarch butterflies produce four generations every year. Most live only a few weeks, but the fourth generation lives several months in order to complete their journey. Photo by Kenneth Dwain Harrelson.
Environment

Morgan Erickson-Davis
View profile
Follow
biggersmaller
Print
Monarch butterflies were once a common sight throughout the North American heartland. In Mexico, where they overwinter, single trees would often be covered in thousands. But declines in milkweed – their caterpillars’ only source of food – have led to a 90 percent decline in monarch numbers. Now, the U.S. Fish and Wildlife Service (USFWS) is reviewing a petition that would grant the iconic species protection through the Endangered Species Act (ESA).

The monarch (Danaus plexippus) is one of the world’s greatest insect migrators, flying 3,000 miles (4,800 kilometers) over four generations from breeding grounds as far north as Nova Scotia to forests in Mexico where they overwinter. However, fewer and fewer have been congregating in Mexico. Surveys conducted by scientists have tracked an overall steep decline over the past two decades.

“We’re at risk of losing a symbolic backyard beauty that has been part of the childhood of every generation of Americans,” said Tierra Curry, a senior scientist at the Center for Biological Diversity. “The 90 percent drop in the monarch’s population is a loss so staggering that in human-population terms it would be like losing every living person in the United States except those in Florida and Ohio.”

Researchers largely attribute the monarch decline to an uptick in the planting of Roundup-Ready GMO crops, which allows farmers to apply more herbicide and kill off other plants in and around their fields. One of these casualties is milkweed, a plant that gives monarchs their poisonous nature – its dramatic orange coloration advertises this to would-be predators –and which is the only thing monarch caterpillars can eat.

“The widespread decline of monarchs is driven by the massive spraying of herbicides on genetically engineered crops, which has virtually eliminated monarch habitat in cropland that dominates the Midwest landscape,” said Bill Freese, a Center for Food Safety science policy analyst.

As a result of the drop in milkweed, monarch numbers have plummeted from an estimated one billion in the mid-1990s to 35 million in the winter of 2013-2014. While 35 million may sound like plenty, scientists believe the species needs high numbers to survive; nearly half of all monarchs are killed every year while overwintering in Mexico due to storms and predators that can tolerate their poison.

In response to the monarch’s decline, organizations such as the Center for Biological Diversity, the Center for Food Safety, and the Xerces Society filed a petition with the USFWS seeking protection for the species through the Endangered Species Act.

“We need to take immediate action to protect the monarch so that it doesn’t become another tragic example of a widespread species being erased because we falsely assumed it was too common to become extinct,” said Sarina Jepsen, endangered species director at the Xerces Society. “2014 marks the 100th anniversary of the extinction of the passenger pigeon, which was once so numerous no one would ever have believed it was at risk of extinction. History demonstrates that we cannot afford to be complacent about saving the monarch.”

The petitioning organizations assert the monarch meets the ESA’s definition of a threatened species, and urge that the USFWS list it as such. By doing so, the monarch would be granted more protections such as designation of critical habitat areas. The next step in the process is a “90-day finding” period in which the USFWS decides whether or not the petition merits further review.

According to researchers such as Lincoln Brower, a monarch expert who has studied the species since 1954, the state of monarchs may foretell broader problems, such as declines in other pollinator species that are important for crop and ecosystem health.

“The monarch is the canary in the cornfield,” Brower said, “a harbinger of environmental change that we’ve brought about on such a broad scale that many species of pollinators are now at risk if we don’t take action to protect them.”

This article was originally written and published by Morgan Erickson-Davis, a contributing writer for news.mongabay.com. For the original article and more information, please click HERE.