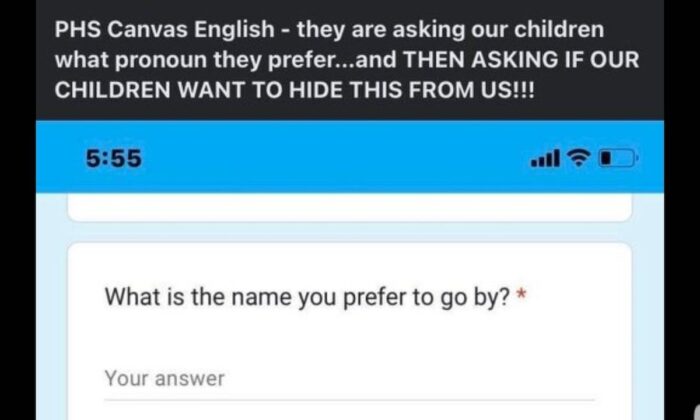 For Pflugerville Independent School District in Texas, it wasn’t enough to just ask children for preferred gender pronouns. The school also asked if teachers should hide preferred pronouns from parents.

“If I ever have contact with your parent/guardians, may I use your preferred name and pronouns from above? (If not YES, please clarify in the ‘Other’ line),” an online survey distributed by teachers reads.

Through incidents like these, an increasing number of parents have learned that public school campaigns to promote child transgenderism rely on secrecy.

Parents have the power to fight back against policies like these, according to Tina Descovich, the cofounder of parent rights group Moms for Liberty.

“Parental rights are natural rights,” she said. “And that means that we as parents have the complete authority to direct the upbringing, education, medical, moral, and religious upbringing of our children.”

Ask And You Shall Receive

Although news stories tend to focus on dramatic confrontations with school boards, lawsuits, and elections, the first step in stopping radical curriculum is talking with teachers, Descovich said.

“If it’s an individual lesson, the first thing you should do is reach out to your child’s teacher and have a discussion and see what the concerns are,” she said.

Talking with teachers about their lessons also creates change most effectively, Descovich added.

Fighting radical curriculum also doesn’t have to be a reactive process, she said. Parents can look into full sets of school curricula as the school year starts. Most school districts put them up for approval at school board meetings at the start of the year.

If parents join one of Moms for Liberty’s over 200 nationwide chapters, they can collaborate to research how their school educates, she said.

“There’s a lot of time for parents to come in and review curriculums, and they need to use their groups or Moms for Liberty chapters so that they can divide up the workload and make sure that everything that’s going to be taught has been approved and has the parents’ stamp of approval on it,” Descovich said.

Keeping informed on curriculum as school starts is only the beginning, said Descovich. Throughout the year, parents should take an interest in their child’s work.

“It starts there, and it goes all the way down to being an engaged, responsible parent that is opening that backpack and looking at the assignments your children are bringing home,” she said.

At some point, schools send schoolwork home. When they do, parents have a chance to see firsthand what schools teach, Descovich said.

“That’s where you find stuff,” she said. “You open the backpack, and you see it in there, and you are shocked.”

“That’s how this stuff gets in there, because parents stop paying attention,” Descovich said.

The biggest misconception that parents have is that they are powerless, Descovich said. When parents pay attention, they can often take action, Descovich added.

“Parents have the right to opt their children out when they have concerning issues. And most teachers, most schools will give them alternate assignments,” she said. “But they have to start by having that conversation.”

Sometimes, success is as easy as asking, she said. A local Moms for Liberty chapter in Descovich’s home county of Brevard, Florida, found that schools had copies of “Gender Queer,” a radical gender ideology book with sexually explicit illustrations.

“Once people were made aware that it was in the library and what was in it, the school district decided to remove it,” she said. “It was as simple as that.”