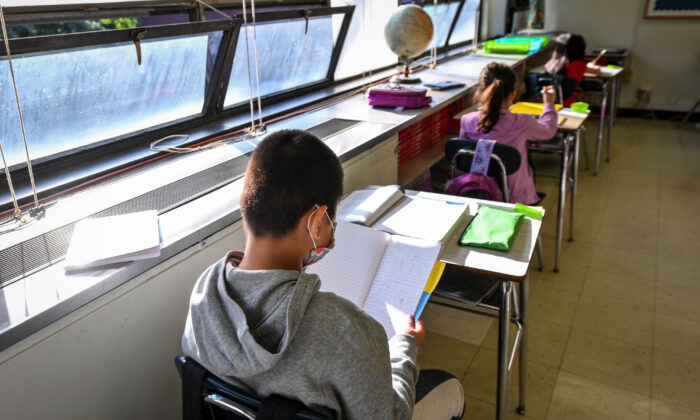 Moms for Liberty Co-Founder Tiffany Justice: Protecting Her Children and Yours

VERO BEACH, Fla.—Moms for Liberty co-founder Tiffany Justice knew better than most parents that there were serious issues plaguing the public school system. She was deeply concerned about forced masking, a lack of discipline, hostility toward parents, low academic standards, and much more.

But until recently, the mother of four and former school board member—now a powerhouse in state and national politics—never dreamed of pulling her children out of the system. In fact, she occasionally chastised those who urged her and other parents to do so.

However, following a long train of abuses, culminating in one of her sons being hit by another student last month and the school handling it in what she called a “disastrous” manner, Justice decided that enough was enough. The time had come to remove her two youngest children from public school.

“This is why public schools are losing families,” she said, posting a picture of his bruised arm. “The school never even bothered to tell me. I had to take the initiative to find out what happened in this situation, and it took over four days.

“For every person that wonders why I continue to keep my kids in public school, I am working to move my two youngest for next year. Enough.”

In a series of interviews with The Epoch Times, Justice said that after her son was hit in the hallway by another student, he filled out a written statement and was sent back to class. Parents weren’t notified.

“We’re not pressing charges, but I felt the school needed to handle the situation properly,” she said.

Adding insult to injury, school officials “tried to use this to hurt me, my family, and my child,” Justice said.

“That was the breaking point for me. The system was clearly going to protect the system, even against somebody they knew personally.”

Her son being hit and the school’s reaction were simply “the icing on the cake,” however.

“That just solidified for us that, after all these issues, we had to get him out,” she said, noting that her two youngest children were now enrolled at a private school. “We no longer felt safe.

“We’re going to see how it goes with the other two children.”

While the attack on her son was the last straw, Justice said her decision to pull her children out was, more broadly, because “they just weren’t doing well in that environment.”

One of her more recent complaints with the system involved having to talk to the science teacher about why her son wasn’t even being required to write in complete sentences.

“Even in English, there was no correction for grammar or spelling,” Justice said, criticizing what she described as a “lack of concern for the skills that we think are necessary.”

The school’s masking requirements and forced quarantines were tough on her children as well.

“This is very difficult for the kids to deal with,” said Justice, who served as a school board member in Florida’s Indian River County for four years.

When she asked if she could accompany her child to class and visit the school last year, she was told that teachers needed 24 hours’ advance notice. When they finally let her come, she had “police supervision all day,” despite being a mother of four and school board member who had undergone background checks and had never faced a complaint.

“I was literally followed by a police officer all day,” Justice said. “They made a spectacle of me. It was a really unfortunate situation.”

School officials “berated” her in a storage closet over her concerns with the police officer standing outside because “I was supposed to be on their team,” she said.

One teacher tried to make a spectacle of her son as well, humiliating him by ordering him to do pushups in front of fellow students. Other concerns she raised included the amount of computer time her children had at school, which she said was “outrageous.”

Another incident Justice recalled was when her son saw a child thrown against the wall by a teacher.

When her son tried to report it, the teacher “berated him in front of the entire class and asked him, ‘Boy, did you snitch?’” she said. “The principal has no control over the school, and it’s not somewhere my son needs to be for the next two years.”

The school district didn’t respond to requests for comment by phone or email.

Justice said these problems are becoming more and more obvious throughout the United States, with teachers lacking the skills they need and students not learning what they need to know.

“The fact that parents got to see some of what was going on as a result of COVID was a blessing,” she said. “COVID was hard, but this was a blessing.”

Among other concerns, Justice said parents are recognizing that the outcomes produced by the school system are “horrible.”

“Two-thirds of kids are not reading at grade level; the math scores are atrocious,” she said. “Parents are looking at this and saying it’s not working. We’re concerned about what this means for the future of America.”

While Justice sees value in the public education system and refuses to abandon it for the sake of the children that are still in it, she believes that dramatic changes are needed.

“I don’t think the current way that it’s working actually works,” she said, pointing to unions and other key players. “We’re funding failure.”

Justice said allowing parents to choose a private school or to homeschool their children themselves and opening up some competition would be part of “reclaiming education” from the current program of “indoctrination—that is what is happening.”

School Board Experience: Tough but Worthwhile

Before founding Moms for Liberty, a national group fighting for “the survival of America” by supporting parental rights, Justice served on the Indian River County School Board from 2016 to 2020.

It began simply enough: Justice and other parents were concerned that the only school in her county’s area, infested with rats and other problems, was going to be shut down.

While Democrats rejected her and some local Republican leaders referred to her as a RINO (Republican in Name Only), she won her race with about 60 percent of the vote.

Even after winning, the attacks were relentless, “because I’m a disrupter,” Justice said.

One of the most intense attacks came when a local liberal paper accused her of having an affair. Despite her father’s Jewish heritage, she was called an “anti-Semite” for resisting training materials from the controversial leftwing Southern Poverty Law Center.

“They decided they were going to make my life a living hell,” she said. “I wouldn’t go along with the grifters in the system, and so they hated me for it. It was nepotism left and right.”

Despite the attacks and being just one vote on the board, Justice said she feels that she made a positive difference. But she wishes she had done more.

“There was always lava burning underneath, and fire hiccups would surface from time to time,” she said. “I should have taken the education curtain—I got to see behind it—I should have pulled it back for everyone. I did what I could, but I wish everybody could see what I saw.”

She said the problems were never truly rectified.

“The district does two things well: protect itself and celebrate itself, including celebrating itself to disguise the failure,” Justice said.

‘Courage Is Contagious’: Moms for Liberty Is Born

Amid the battles taking place in the local school district, Justice connected with another school board member in the county north of hers who was facing similar struggles.

Tina Descovich, a mother of five who was elected to the Brevard County School Board the same year that Justice was elected to her school board, was very different than Justice, but was essentially fighting the same battle.

“We both had a visceral reaction to what was happening—the erosion of parental rights, the erosion of foundational principles of America,” Justice said. “Tina was in the same situation. We decided we had to do something.”

Just three weeks after launching Moms for Liberty, the mothers got a call from a woman in New York state who wanted to start a Long Island chapter.

Today, there are more than 200 chapters spread across almost 40 states, with the number of members growing rapidly.

Those chapters are working to get good legislation passed and get school board candidates who will support parental rights elected, Justice said. That includes vetting and endorsing candidates, creating a forum for debate, providing resources, and more.

“We’re really focused on unifying and education, that’s what empowers people,” Justice said when asked where the movement goes from here. “Nobody will fight harder for their kids than moms, and when unified and educated, they will rise.”

The “expert class” has failed Americans and parents, and now it’s time for mothers to trust themselves and each other in raising their own children.

“Parents now are looking at each other and realizing they are actually the experts,” she said.

Key targets of the group include the Marxist critical race theory, critical pedagogy, “gender” ideology, and other forms of anti-American indoctrination, academic failure, and “whatever issues are affecting our kids in school.”

“We know we’re fighting for the survival of America,” Justice said. “We didn’t ask for this. Moms and dads are wondering when we ever said this was OK, much less OK in K–3. We don’t want this taught. We will not let them redefine the boundaries between home and school.”

Within five years, she hopes that every state will have strong legislation protecting parental rights.

“Courage is contagious,” Justice said. “We see that in the growth of our chapters. We see that a spark can grow like a wildfire.”

Very early on in the struggle, a friend told Justice that they were now “war moms,” she said. It really stuck in her mind.

“It’s our job to tell all the moms in America that they are war moms now, and we all need to get ready to fight,” she said, saying that it was critical to remain a “joyful warrior” in the fight for the United States and future generations.