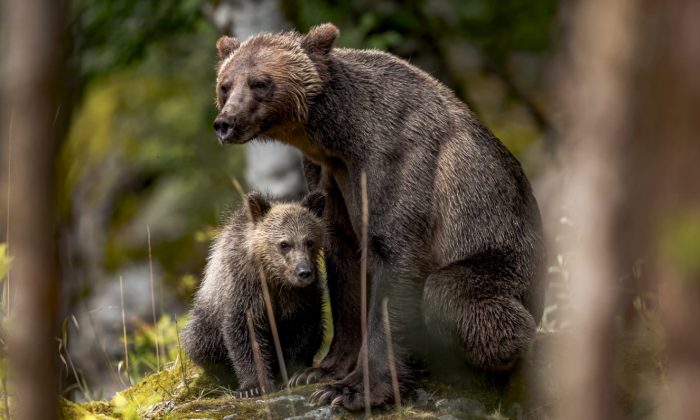 Undated file photo of a mother bear and her cub at Mount Waddington, Canada. (Thomas Lipke/Unsplash)
Crime and Incidents

A visitor to Great Smokey Mountain Park was caught on camera approaching several black bear cubs and getting charged at by the mother bear.

Paige Marple, who witnessed the tense encounter at Cades Cove on Saturday, July 13, told 10News, “I honestly thought we were going to sit there and just watch him get mauled.”

Marple told the news outlet she wanted to record some video of the bear family as it emerged at the roadside, but ended up horrified at the prospect of capturing a mauling when a man in a white T-shirt and jeans confronted the baby bears close to their protective mother.

“It was pretty intense for a second because I just knew he was going to end up in a body bag.” Marple told WVLT. “How he didn’t is beyond me.”

WVLT posted the video on its Facebook page, to heated responses.

“My wife and I were in the same area of the five several years ago and witness as we are walking to our car a parent with kids taking pictures 20 feet from an adult bear,” one person commented. “I think people associate the national park as a petting zoo. People need to realize they are in the wilderness with wild animals!”

“I was told by a ranger the best thing to do if you see anyone doing this is to get pictures of them and their license plate and turn it in as soon as you can,” someone else wrote. “They do take this seriously.”

‘He Was Asking For It’

In the video, the man approaches the tiny cubs with his hand outstretched, as if beckoning them over to play. The terrified cubs dart in between cars and the man walks around the vehicle to cut them off. That’s when the momma bear emerges to square off against the confrontational human.

But rather than back off, the man points his finger off to the side as if to order the mother bear to move aside and expose her babies. That’s when the mother bear charges, her snout coming within a foot or so of the man’s body.

“I honestly thought me and everybody else parked in that parking lot were about to be traumatized for the rest of our lives,” Marple told 10News. “I really thought she was about to attack him.”

The man jumped back in evident fear for his life, but as the bear ushered her cubs across the road, he again started walking towards the bear family.

Marple said witnesses then began to yell at the man to stop harassing the animals.

“There were people on the other side telling him he was an idiot,” Marple told 10News. “I wasn’t going to interfere. You can’t stop stupidity.”

“I hope they don’t put the bear down because of this man,” one person commented.

“We have watched this little family for months FROM THE REQUIRED DISTANCE,” another person wrote. “He needs to be fined and banned from the Great Smoky Mtns. She’s a great mother and always wary at the required distances.”

“She has the right to protect her babies,” a commenter noted. “He was asking for it.”

“Unfortunately they try and limit the human and bear interactions,” someone else said. “When a bear is aggressive towards a human. The bear is usually euthanized. Unfortunately.”

Mother Bear Bites Man After His Dog Attacked Her Cub

The incident recalls the case of a mother bear attacking a man in a suburb in California on June 10, after the man’s dog attacked her cub.

The protective mother bear bit and slashed the man in his 50s after he kicked her while trying to protect his dog, reported KTLA.

The victim was in his backyard with his dog chased at the bear’s cub, reported CBS2.

UPDATE: A man and his dog are expected to be fine following a bear attack in Sierra Madre https://t.co/nqr5ncvAOm pic.twitter.com/p4zZFVLG9S

The man’s small dog went after the cub and the mother bear attacked him to protect her little one. The man stepped in and kicked the bear to protect the dog and got bitten.

KTLA reported the man was taken to the hospital and treated for non-life-threatening injuries. The dog was also expected to be OK.

California is home to only one species of bears–black bears. However black bears come in black, brown, blond and cinnamon colors.