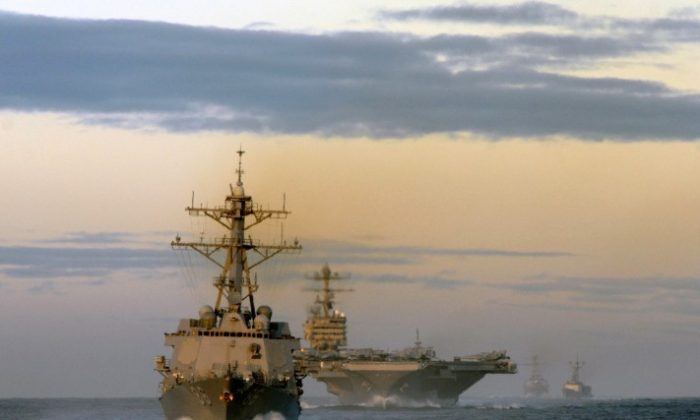 Momentum Critical for US Defense Plans in Asia Pacific: Report

WASHINGTON—The United States must maintain momentum in re-aligning its military forces to the Asia Pacific or it will lose strategic ground and the confidence of regional partners, according to an independent report on the defense strategy.

“The stakes are growing fastest in South and Southeast Asia,” reads the report by Washington-based think tank, the Center for Strategic & International Studies (CSIS). “To be successful, U.S. strategic re-balancing needs to do more in those areas, while simultaneously working with major allies in Northeast Asia to shore up deterrence capabilities in the wake of emerging anti-access and area denial (A2AD) threats.”

The statement makes particular reference to China’s increasingly aggressive actions over territory, upsetting a number of countries in the region.

“Recent developments include an uptick in confrontational rhetoric, disagreements over resource exploitation, coercive economic actions, and the incidents around the Scarborough Reef, including the use of barriers to deny access,” the statement says.

“We continue to urge all parties to clarify and pursue their territorial and maritime claims in accordance with international law, including the Law of the Sea Convention,’ it continues.

The Obama administration announced plans in January to direct national security forces away from the Atlantic, and to the Asia Pacific, noting rapid economic growth and increasing military power in the region.

Asia Pacific countries, unsettled by China’s aggressive antics, have welcomed the shift, including Australia which has agreed to allow U.S. marines to rotate through its north, and Japan which has offered to contribute to the cost of redeploying Marines from the U.S. base in Okinawa to Guam.

Budget constraints across the defense arena, however, have created uncertainty. This was further compounded by the threat of sequestration, which will see a half a trillion dollars shaved from defense should Congress be unable to agree on a strategy to reduce the deficit.

The CSIS report concluded that the Pacific strategy was sound, but recommends that the plan be better articulated both to Congress and to U.S. allies. As the stakes increase in the area, momentum is critical, it states.

“We have to live up to the commitments we have made [to relocate Marines] or we lose credibility with the very partners with whom we are trying to increase engagement,” David Berteau, director of the CSIS international security program and coauthor of the report, told a House subcommittee last week.

The region presents a range of security challenges including North Korea’s nuclear capability, terrorism, and territorial disagreements, but all are underscored by the rise of China, he said.

“The central geostrategic uncertainty the United States and its allies and partners face in the Asia Pacific region is how China’s growing power and influence will impact order and stability in the years ahead,” Berteau said.

The U.S. strategy is not meant to contain China, but to “win the peace,” he said, to create an environment that would see “conflict virtually unthinkable and cooperation mutually attractive.”

While that involves multiple facets including diplomacy and trade, military readiness is a critical pillar.

In the event of conflict, “U.S. force posture must demonstrate a readiness and capacity to fight and win,” the report states.

Speaking in Singapore in June, U.S. Defense Secretary Leon Panetta said U.S. Navy presence in the Pacific would expand to 60 percent of the force, with the realignment increasing the number of aircraft carriers, cruisers, destroyers, and submarines.

Military and training exercises would also be boosted and new weapons had been slated for the area, including the new F-35 Joint Strike Fighters, a new Air Force long-range bomber, new Virginia-class nuclear-powered submarines, and electronic warfare systems.

Contingent to the success of the military plan is the strength of regional cooperation and solidarity with, and between, allies, the report states.

We “have to have skin in the game,” Dr. Michael Green, co-author of the report and Japan chair at CSIS, told the hearing.

“If we are not willing to invest ourselves in some of these new facilities, it is going to be a hard case for us to make to allies and partners that they should do it and that we are committed to our Asia Pacific strategy,” Green said.

While Panetta announced heavy cuts in the 2013 fiscal budget for defense he noted that commitment to the Pacific Command would increase.

When asked what effects sequestration would have on the Asia Pacific strategy, Bertreau said there would be very little financial gain, and disproportionate loss.

“You wouldn’t save much money, even with a pretty big force structure reduction in the Pacific, but again you would lose a heck of a lot of capability,” he said. ” We think that is a pretty bad trade off.”

“We strongly recommend you sustain and build on the current force posture in the pacific region,” he added.