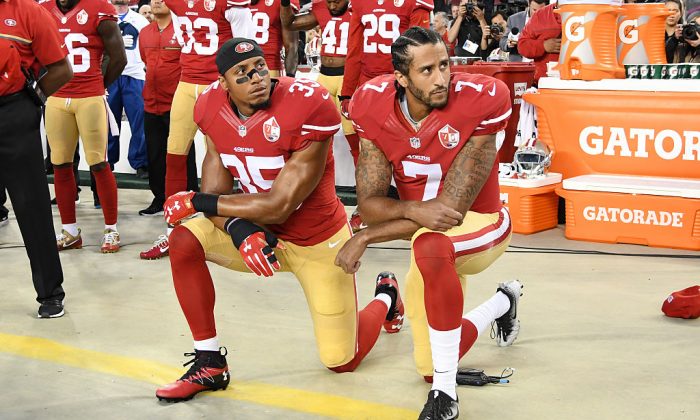 Colin Kaepernick and Eric Reid kneel in protest during the National Anthem on Sept. 12, 2016. (Thearon W. Henderson/Getty Images)
US News

Gold Star mom Amanda Jacobs has criticized former NFL quarterback Colin Kaepernick—who said recently that an older version of the American flag was offensive—during an emotional speech at the U.S. capital, saying that her son, along with other fallen heroes, had given more than “any athlete has ever given.”

“When I look at this country today and I tell people, and I’ve wanted to say this loud so many times, Colin Kaepernick was getting paid $14 million dollars a year to throw a ball,” Jacobs told the audience during an anti-socialist “Rally for Freedom” on July 4.

“My son died for $14,000 a year and he’s given more than any football player, any athlete, has ever given,” she added.

Gold Star mom laces into anti-American Colin Kaepernick: My son “has given more than any athlete has ever given!” pic.twitter.com/tMsJNyzaPx

She continued her speech honoring her son Lance Cpl. Christopher Phoenix-Jacob Levy who was killed in combat on Dec. 10, 2011 in Afghanistan.

“These two children right here you can look at a flag and say that’s uncle Jacob,” Jacob said.

“That’s what we are here for today, not because I wanted to be a Gold Star mom. I got gold stars in school for making grades but this gold star I wear every day isn’t for me, it’s because what my son chose to do without my permission, trust me, and I have a 17-year-old that is doing the same thing and it’s because of what they believed.

“And I hear these Marines that come to my house and stay for four days, you know, I got 30 Marines that sleep on my floor and it’s great but they tell us that the only thing that kept them going is when they could look up and see that flag they had hope to go back home to and I hope that this country was going to change for the better, not for the worst,” she added.

Kaepernick has recently been in the spotlight for comments that have been criticized as anti-American.

The former athlete took issue with one of Nike’s sneaker designs featuring a Betsy Ross flag, an older version of the American flag that was created during a time when slavery was widespread, saying it was “offensive.”

The sports giant created the sneaker to celebrate July 4.

As a result of his comments, Nike halted the production and sale of the sneakers saying that they did not want to “unintentionally offend” people. This move sparked a backlash on social media and from prominent figures and politicians like Rep. Morris Jackson “Mo” Brooks Jr. (R-Ala.).

“We’ve got some very radical people in the United States of America who don’t like America,” Brooks said during an appearance on SiriusXM Patriot’s Breitbart News Tonight on July 3. “They don’t like the foundational principles that have made us a great nation. And I would put Mr. Kaepernick in that category.”

He called Kaepernick’s protest against the shoe design as “absolutely absurd.”

“In my mind, perhaps he ought to consider moving to a country where he believes the laws are better for his purposes. I doubt he will do that because in this country, we’ve had over a million Americans die fighting for our liberties … and one of those liberties is freedom of speech … and all of these things that we enjoy, he seems to frown upon. So I just assume he leave,” he added.

Kaepernick was also under fire for a Twitter post he made for Independence day in which he shared a quote to his followers from a renowned slavery abolitionist, who expressed that America was “guilty of practices … shocking and bloody.”

The Twitter post featured a video that showed various drawings of lynchings, slavery on plantations, and the Ku Klux Klan interspersed with more recent footage of police brutality.

“What have I, or those I represent, to do with your national independence? This Fourth of July is yours, not mine…There is not a nation on the earth guilty of practices more shocking and bloody than are the people of these United States at this very hour.”
– Frederick Douglass pic.twitter.com/IWLujGCJHn

Kaepernick said in his post: “What have I, or those I represent, to do with your national independence? […] This Fourth of July is yours, not mine … There is not a nation on the earth guilty of practices more shocking and bloody than are the people of these United States at this very hour.”

The quote comes from a well-known speech now referred to as the “What to the Slave Is the Fourth of July?” delivered by Frederick Douglass on July 5, 1852, in Rochester, New York.

Senator Ted Cruz (R-Texas), who chairs the Senate Judiciary Subcommittee, responded to Kaepernick in a Twitter thread to point out the context without which “many modern readers will misunderstand.”

Cruz pointed out that the speech was delivered before the Civil War “when the abomination of slavery still existed.”

“Thanks to Douglass and so many other heroes, we ended that grotesque evil and have made enormous strides to protecting the civil rights of everybody,” Cruz wrote.

Responding to Kaepernick, Cruz noted, “Douglass was not anti-American; he was, rightly and passionately, anti-slavery,” and proceeded to cite the concluding words of Douglass’s speech where he expressed hope in the nation.

“I do not despair of this country … There are forces in operation, which must inevitably, work the downfall of slavery … the doom of slavery is certain … I, therefore, leave off where I began, with hope. While drawing encouragement from the Declaration of Independence, the great principles it contains, and the genius of American Institutions, my spirit is also cheered by the obvious tendencies of the age.”

“I, therefore, leave off where I began, with hope. While drawing encouragement from ‘the Declaration of Independence,’ the great principles it contains, and the genius of American Institutions, my spirit is also cheered by the obvious tendencies of the age.”

Kaepernick is most well-known for stirring controversy in 2016 by kneeling during a pre-match national anthem.