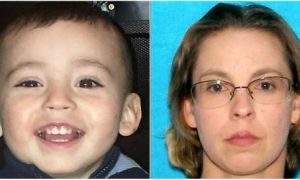 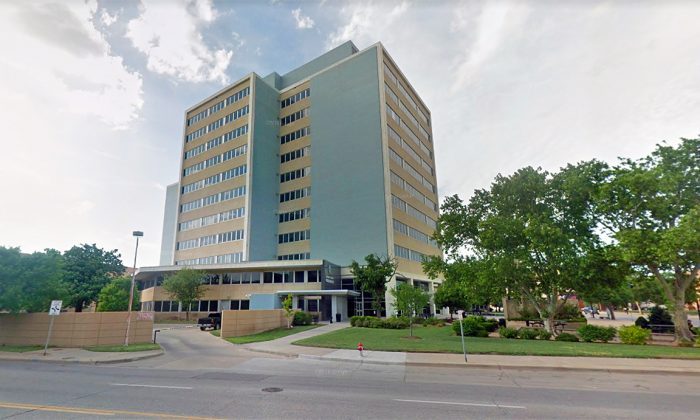 Exterior of the 18th Judicial District Court building in Wichita, Kan., in May, 2018. (Google Maps Street View/Screenshot)
Crime and Incidents

Mom Who Abused 3-Year-Old Son, Buried Him in Concrete, Goes to Jail for 25 Years

A mother will spend up to a quarter of a century behind bars after being found guilty of severely abusing her son and burying his dead body in concrete, a Kansas court ruled on March 28.

Miranda Miller said at a hearing in the 18th Judicial District Court that she had failed as a mother to protect her son Evan Brewer, 3, from months of abuse from herself and her live-in boyfriend, Stephen Bodine. Miller accused Bodine of controlling her through domestic violence, mental abuse, and drugs, according to the Wichita Eagle.

Investigators believe Bodine killed Brewer in May 2017 before hiding his body. Prosecutors claimed little Evan was forced to stand naked and chained for hours while being taunted and slapped even when he cried. His body was discovered in concrete after the couple moved out of their rental home in Wichita.

Miller confessed she should have called police when the abuse first started.

“At the time, I did what I thought was best,” she said. “In the end, I failed as a mother to protect my child. I will live with that the rest of my life.”

Her attorney, Steven Wagle of Steven Wagle Law Offices, appealed for Sedgwick County District Judge Stephen Ternes to give Miller a lighter sentence, saying that Bodine was controlling her. However, the judge and Evan’s relatives did not accept that this was a factor that would reduce Miller’s sentence.

“While I did hear your statements, I must say after hearing the evidence in the trial that you are more than a mother who failed to protect her child,” Ternes said. “You actively participated in his murder.”

Dozens of witnesses were called on during Bodine’s trial, and prosecutors presented more than 550 pieces of evidence, including parts of the concrete tomb, videos, and photos showing Evan being abused.

Evan’s father, Carlo Brewer, appeared as a witness and said he was prevented from seeing the boy just weeks before he died.

“The day Evan was found, I was in disbelief and denial. I thought there was no possible way that anyone, even the worst individuals, could look into his beautiful, innocent eyes and harm him,” Carlo said. “I didn’t believe that a mother was harming or allowing someone to harm their child … the individual who gave birth to this child betrayed him and was his predator.”

A Kansas woman has been sentenced to 25 years in prison for killing her son and encasing his body in concrete. https://t.co/ygyOjI9fBL

According to Miller, Evan died sometime between May 18 and 23, 2018. On the day he died, Evan would not eat, prompting Bodine to hit him so hard that the boy became unresponsive. Bodine then proceeded to take Evan into the bathroom where Miller tried to perform CPR on the boy for 45 minutes without success.

She later asked where her son was and Bodine informed her Evan was already gone because they could no longer take care of him.

Miller said sometimes she would spank her son, but Bodine would take over if he “didn’t feel like I was being hard enough on Evan.”

Miller said she saw Bodine mix several bags of concrete and bury Evan’s body in it a few days later in the laundry room.

“Stephen wanted to hurry up and take care of Evan before he started to smell,” she said.

The official autopsy could not determine a specific cause of death because the boy’s body was too badly decomposed by the time it was found, according to the forensic pathologist.

Kansas mom gets 25 years in death of son found in concrete https://t.co/x3YX4NbnSJ pic.twitter.com/plw6mhOZt1