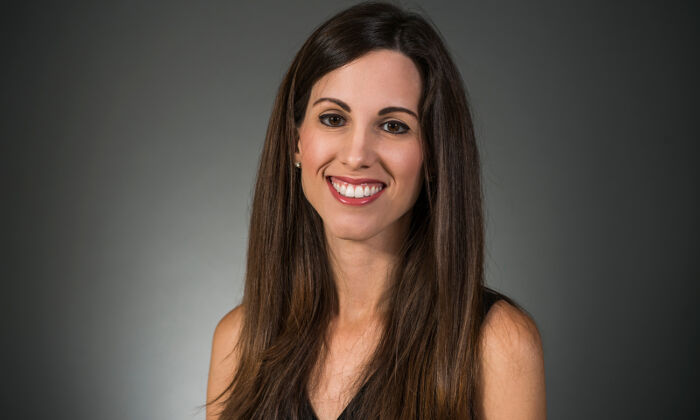 South Kingston parent Nicole Solas is involved in litigation against her school district for barring her from meetings of the school board advisory committee. (Courtesy of http://www.blueflashphotography.com)
US

A Rhode Island mother has filed a lawsuit against her local school district’s taxpayer-funded Black, Indigenous, and People of Color (BIPOC) Committee for barring her from attending its meetings.

Nicole Solas, a mother of two and a senior fellow with the conservative Independent Women’s Forum, is also the subject of pending litigation brought against her by the National Education Association Rhode Island (NEARI), the state’s largest teachers union.

The Goldwater Institute, a conservative public policy think tank, filed suit on Aug. 2 on behalf of Solas against the BIPOC Committee and the South Kingston School Committee.

The lawsuit alleges that the BIPOC Committee, which was formed by the school board, is meeting illegally behind closed doors, in violation of Rhode Island’s Open Meetings Act (OMA) laws, and asks the court to nullify any actions taken by the committee during its closed meetings.

Although the BIPOC Committee has kept its meetings closed to the public, an allocation of $5,000 in taxpayer money to fund an organization called Nonviolent Schools Rhode Island, as approved by the school’s policy-making subcommittee, reveals some of its activity.

The organization advertises anti-racism after-school training programs for educators, staff, and administrators, and runs book clubs for students on such selected titles as “How to Be an Antiracist” and “White Fragility.”

Its executive director is Robin Wildman, who also happens to be the chairwoman of the South Kingston BIPOC Committee and also the person who told Solas she couldn’t attend the group’s meetings.

Two members of South Kingston’s policymaking committee who approved the allocation of the $5,000 to Wildman also happen to sit on the town’s BIPOC Committee.

One of them, Mwangi Gitahi, wrote about the activity of the BIPOC Committee on the website of Collective, an anti-racist bookstore run by a school committee member who also is a union organizer for the teachers union that sought a restraining order over Solas’s public record requests.

“As a member of the BIPOC advisory board, I have been closely examining a number of existing school district policies, looking at them line by line through an antiracist and equity lens,” Gitahi wrote.

“We have now reviewed policies ranging from discipline and suspension to coaching and hiring. We are hard at work crafting a framework for all these policies, which we are calling the Anti-Racism and Anti-Discrimination Policy.”

A proposal for services from Wildman’s organization, which Solas obtained through a public records request, also states that the BIPOC Committee has “written an Anti-racism/Anti-discrimination policy” for the school district.

The new policy mandates that all school committee members, school administration, faculty, and staff attend training related to the new policy, and on “an annual basis.”

“Besides being what seems to be a major conflict of interest,” Solas told The Epoch Times, “what this town-appointed committee has been doing definitely seems like the public’s business to me.”

Solas filed the lawsuit after state Attorney General Peter Neronha sent her a letter in May indicating that after an investigation, his office determined that the BIPOC Committee wasn’t a public body and, therefore, wasn’t violating Rhode Island’s open meeting laws.

In appointing the BIPOC Committee, the school board dubbed it an “advisory committee,” which Solas believes allows the group to evade public meeting laws.

According to school records, the BIPOC Committee has met weekly since it was formed by the school board in July 2020.

As cited in the lawsuit, OMA defines a “public body” as “any department, agency, commission, committee, board, council, bureau, or authority, or any subdivision thereof, of state or municipal government.”