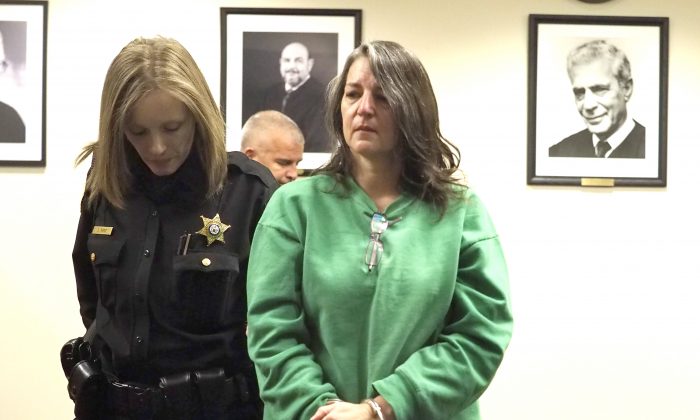 Michelle Lodzinski is escorted from the courtroom after being sentenced to 30 years for the 1991 murder of her 5 year-old son Timothy Wiltsey, Thursday, Jan. 5, 2017, at Middlesex County Court in New Brunswick, N.J. (Patti Sapone/NJ Advance Media via AP, Pool)
Crime and Incidents

NEW BRUNSWICK, N.J.—A Florida woman convicted of killing her 5-year-old son in New Jersey in 1991 was sentenced Thursday to 30 years in prison by a judge who accused her of repeatedly lying about his disappearance.

Michelle Lodzinski, who has always maintained her innocence, declined to address the court before she was sentenced in Timothy Wiltsey’s death. Her attorney had sought the least time under the sentencing guidelines, which called for 30 years to life in prison.

“I’m sure Timmy would not want to impose a life sentence on his mother,” said Gerald Krovatin, Lodzinski’s attorney.

Prosecutor Christine Bevacqua objected and argued for no mercy. “A mother who kills her child should spend the rest of her life in prison,” Bevacqua said.

Superior Court Judge Dennis Nieves said the 49-year-old Lodzinski will be “old and gray” when she is released from prison. He told her she had lied over and over about the disappearance and death of her son. The judge gave her 884 days of credit toward her sentence.

Her lawyers are expected to appeal.

Lodzinski said her son disappeared from a carnival in central New Jersey, then later claimed he was abducted.

Lodzinski, who had been living in Port St. Lucie, Florida, and has two other children, has been held in New Jersey since her arrest in 2014. She was charged in 2014 after witnesses identified a blanket found near the boy’s body nearly a year after he disappeared.

She was long a prime suspect in Timothy’s death, but investigators didn’t believe they had enough evidence to convict her until they reopened the case several years ago and eventually found witnesses who could identify the blanket as having come from Lodzinski’s apartment.

That testimony was vital to the prosecution’s case because no forensic evidence tied Lodzinski or the boy to the blanket or other items found near his remains 11 months after he disappeared. A cause of death couldn’t be established because the skeleton was so deteriorated.

During the trial, prosecutors also focused on Lodzinski’s changing stories about Timothy’s disappearance, which they argued demonstrated consciousness of guilt. They painted Lodzinski as a young, single mother — 23 at the time of his disappearance — who struggled with jobs and relationships because of the boy and wanted to move on in life without him.

They contended Lodzinski concocted a story about the boy disappearing from the carnival and told jurors no one who knew the boy saw him with her that night.

Lodzinski’s attorney produced witnesses who worked at the carnival who claimed they saw a boy who looked like Timothy, and he attempted to cast doubt on the reliability of the witnesses who testified about the blanket.

Krovatin also put on the witness stand an ex-convict from Arizona who testified that a former associate confessed to killing a young boy under circumstances similar to Timothy’s death.