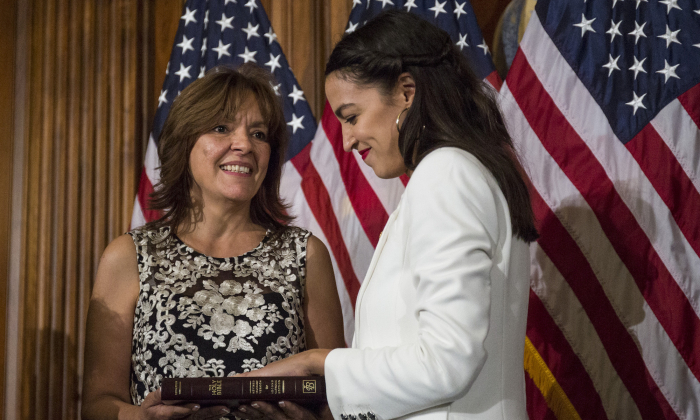 The mother of socialist Rep. Alexandria Ocasio-Cortez left New York for lower real estate taxes in Florida, according to an interview published on March 4.

“I was paying $10,000 a year in real estate taxes up north. I’m paying $600 a year in Florida. It’s stress-free down here,” Blanca Ocasio-Cortez told the Daily Mail.

Ocasio-Cortez (D-NY) is pushing for a radical “Green New Deal” policy which would cost as much as $9.3 trillion per year. In comparison, the U.S. government is expected to collect $3.4 trillion in taxes in 2019.

In addition to being home to a number of counties with very low real estate taxes, Florida also has no state income tax. As a result, Americans from states with heavy taxation, like New York and New Jersey, look to Florida as a haven.

Blanca Ocasio-Cortez said that she had difficulty making ends meet in New York.

“We moved from The Bronx to Yorktown Heights, but it was difficult making ends meet,” the mother said. “I was skipping mortgage payments and we almost lost the house twice.”

Blanca Ocasio-Cortez did not agree that her daughter is a socialist, suggesting that democratic socialists are different. Democratic Socialists of America, of which Ocasio-Cortez is a member, openly defends socialism, advocates for a radical transformation of the United States, and promotes an agenda virtually indistinguishable from socialism.

“She wasn’t raised to be a socialist,” Ocasio-Cortez said. ‘That’s not how Puerto Ricans are. She’s a democratic socialist, and it’s very different.”

Alexandria Ocasio-Cortez became the youngest woman to be elected to Congress in a surprise victory over incumbent Rep. Joe Crowley (D-NY). She moved quickly to introduce a resolution regarding the “Green New Deal,” which includes proposals like replacing all combustion-engine cars with electric vehicles and replacing or reconstructing every building in the United States.