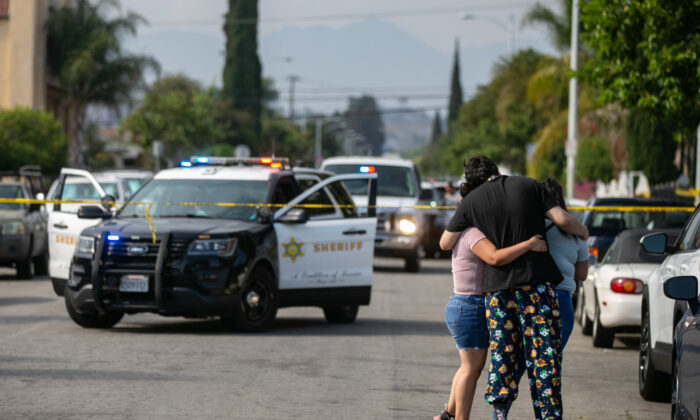 Neighbors embrace and the come to grips with three children being found dead at a home on South Ferris Ave in East Los Angeles, Calif., on June 28, 2021. (Jason Armond/Los Angeles Times/TNS)
Southern California

By Richard Winton and Matthew Ormseth
From Los Angeles Times

LOS ANGELES—The mother of three children found dead in an East Los Angeles home has been arrested on suspicion of murder and is being held in lieu of $2 million, Los Angeles County sheriff’s officials said Tuesday.

Sandra Chico, 28, was taken into custody as a “person of interest” after deputies found her children unresponsive in the home Monday afternoon. She was booked at 11 p.m., records show. She is being held at the Central Regional Detention Facility in Lynwood.

Chico is due in court on Wednesday, the Sheriff’s Department said.

Deputies responded about 12:45 p.m. to Chico’s home in the 600 block of Ferris Avenue and found the children—two boys and a girl, all younger than 3—unresponsive and not breathing, sheriff’s Lt. Charles Calderaro said. Chico was inside the home when deputies arrived.

He said there was another person in the house when deputies arrived, possibly a relative of the children, and authorities think that person called authorities.

Despite life-saving efforts, the children were all pronounced dead at the scene, Calderaro said. It wasn’t immediately clear how they had died, he said.

There were “no obvious signs” of trauma, Calderaro said, adding that the county medical examiner-coroner’s office would make an official finding of the causes of death.

The lieutenant said it did not appear that the county Department of Children and Family Services had been involved with the children, although he cautioned this information was preliminary.

The discovery comes three months after three young children were found dead in an apartment in Reseda. In that case, the siblings’ mother was eventually arrested.