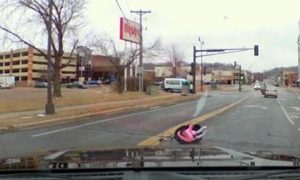 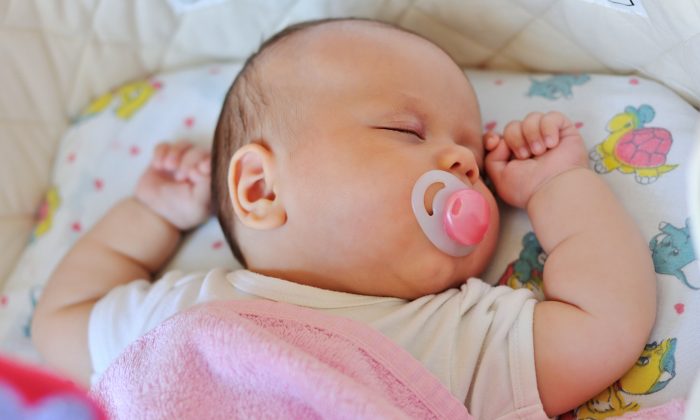 A mother issued a warning after her newborn baby stopped breathing following a long car ride in a car seat.

Kirsti and Christopher Clark, of Scotland, said they discovered their four-week-old child, Harper, foaming at the mouth and not breathing after they drove home in rush-hour traffic, the Daily Mail reported.

The parents grabbed Harper and their 3-year-old, Malena, and went to the hospital.

Fortunately, medics were able to revive Harper after she had suffered a seizure, the Mail reported.

The report noted that the pair went out at around 2:30 p.m. for shopping with their children. They left home at around 6:30 p.m., and the trip took longer than usual, or about 1 hour and 45 minutes.

“When we got home it was way past Malena’s bedtime so brought Harper in her car seat and she stayed in there for 15 minutes as we got Malena into bed,” Kirsti said, according to the Daily Record.

“My husband got Harper out and put her on his knee but she looked like she couldn’t get comfy so he laid her down on her mat and she was kicking about,” she said. “I told him her lips looked blue and then he pointed out how red her cheeks were. He picked her up and I could tell straight away from his face that something was wrong.”

Medics warned the parents that newborn babies who spent more than an hour in a car seat can suffer from oxygen deprivation. The reports said that Harper suffered a seizure due to low oxygen levels.

“When the consultant told us it was the car seat I couldn’t believe it. I thought ‘there’s no way’. I couldn’t understand why nobody had ever told us,” she told local news outlets. “We had obviously heard about not keeping babies in car seats overnight because it causes curvature of the spine but not about anything like this.”

She noted: “When my wee girl was a baby we did four-hour drives down to visit family in Cornwall and we had never had any problems at all.”

But doctors informed her that the problem is usually present in premature babies. However, her daughter was born healthy at 8 pounds, 5 ounces.

“After we got my head around that being the reason, Christopher and I felt so angry at ourselves – we felt like we did this to our baby. It was horrendous,” Kristi recalled, adding that other people have never heard of anything like this.

“That’s why we knew we had to share what happened to Harper because parents need to know. Just two hours in a car seat and we could have lost her, it’s terrifying,” the worried mother said. “I would tell every parent to just really carefully watch their babies and if they don’t absolutely need to be in the car seat take them out because it is not worth what we had to go through.”

The American Academy of Pediatrics (AAP) says that car seats can lower oxygen levels for newborns.

“Car safety seats are one of the most effective ways to protect children from injury and death in the first years of life. For the best protection in a crash, car seats require infants to be placed in an upright position. However, this posture can partially compress the chest wall and reduce airway size, resulting in lower levels of oxygen,” the organization says on its website.

In a study, “The mean oxygen saturation level was significantly lower in the car seat (95.7 percent) and the car bed (96.3 percent) compared to the crib (97.9 percent). Previous studies have found similar effects on premature infants; this study confirms the respiration of full-term infants is also affected by car seats and car beds,” the AAP also said.