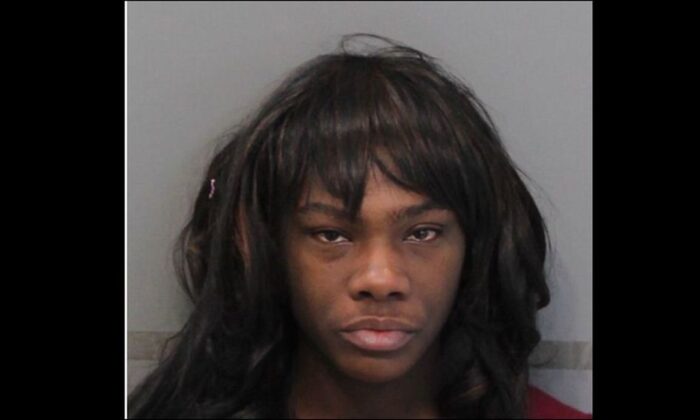 Tybresha Sexton told police the reports weren't true and allowed an officer to check the infant. (Chattanooga Police)
US News

Warning: The Facebook video may be disturbing to some viewers. Discretion is advised.

A mother in Tennessee is accused of filming herself blowing smoke near her baby’s face before lifting her in the air and shaking her, according to reports.

WTVC reported that Chattanooga Police went to Tybresha Sexton’s home after tipsters told them about the Facebook live stream.

Sexton’s live stream is no longer available, but another woman re-uploaded it on the social media website (Warning: disturbing footage).

Sexton, 24, is also accused of grabbing the child and dropping the child, who is about 1-year-old.

An officer who responded in the case said that she smelled of alcohol and made irrational statements, WLOS reported.

She told them that the reports of her abusing the child weren’t true. Neighbors then arrived on the scene and showed police clips of the 30-minute video of her allegedly shaking the infant, the report said.

According to a police affidavit cited by WLOS, Sexton loudly stated that she “didn’t want that [expletive] baby anyway.” It also said that she “already told them that.”

When she was taken to jail, police said that she caused a disorder and told officers the statement about not wanting the baby, WRCB-TV reported. She was charged with aggravated child abuse, resisting arrest, and disorderly conduct.

The infant is now with Sexton’s mother, WLOS reported.

She is slated to appear in court on Oct. 4, according to reports.

Sexton was arrested in 2016 for a carjacking and was charged with aggravated robbery and possession of a firearm, the Times Free Press reported.