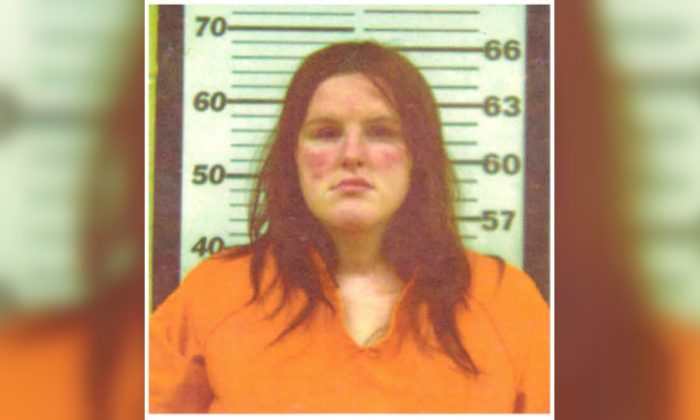 Police arrested a western Pennsylvania woman on Sunday after her father found the lifeless body of a newborn boy in a plastic bag underneath the porch of the family home.

Brittany Nicole Robinson, 23, gave birth on Friday in a bathtub at her family home, Centre Daily Times reported, citing police. Robinson told investigators that she did not know she was pregnant and that the baby did not have a heartbeat when he was born.

Robinson told police that she put the baby in a dresser drawer and went to work. She then moved the newborn’s body into a crawlspace underneath the porch at the family home.

“The baby was a viable 7-pound baby boy,” state police Lt. Eric Hermick told KDKA-TV. “The baby was born alive and cleaned up and then placed under there.”

Robinson’s father discovered the body when he was running wiring for holiday lights. Police said the newborn’s body was wrapped in a T-shirt and placed in a Walmart plastic bag, a difficult sight for first responders.

“Everybody that’s been to that scene, that was present, who had to observe that has had a rough day,” Pennsylvania State Police Lt. Eric Hermick told WSB-TV.

“When you’ve seen this baby, it’s not what everybody envisions as you see there’s a baby that appears to be dead or decomposed,” Hermick said. “This baby was in excellent physical condition. It still looked like it was alive at the scene.”

Investigators executed a search warrant at the home and found clues suggesting that Robinson did know of her pregnancy prior to giving birth.

Robinson lived at the home with her father, two brothers and another man. Investigators spent hours questioning the residents. All of the inhabitants said that Robinson kept the pregnancy a secret.

“They’ve all indicated to us they weren’t aware, that she kept it a secret,” Hermick told KDKA. “There are laws in place that protect mothers if they don’t want their child. They can drop it off at a police station, a hospital, fire department. There are a lot of families out there that want children, that can’t have children.”

Robinson was taken to UPMC Horizon Shenango Valley hospital for treatment related to childbirth. She was arrested by state troopers as soon as she was discharged.

Robinson was charged on Monday with criminal homicide, concealing the death of a child, abuse of a corpse,  and tampering with evidence, Pittsburgh Post-Gazette reported. She is being held at the Lawrence County Jail.

Robinson also has an 8-year-old child but does not have custody.