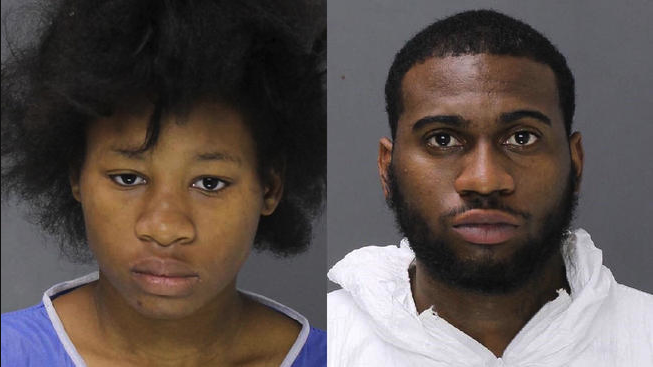 Lisa Smith, 19, and Keiff King, 26, were arrested Tuesday, Jan. 23 in connection with the beating death of their 4-year-old son, according to the police. (Montgomery County District Attorney)
Crime and Incidents

Police said a Pennsylvania mother and her boyfriend were arrested on Tuesday, Jan. 23, accused of beating their 4-year-old son to death because he spilled his cereal.

Lisa Smith, 19, and her boyfriend Keiff King, 26, of Willow Grove, face charges of criminal attempted murder, aggravated assault, endangering the welfare of a child, and other crimes in connection with the death of their son, Tahjir, NBC10 reported.

After the boy admitted to spilling a bowl of breakfast cereal, Smith and King allegedly punished him–resorting to other various forms of physical abuse.

Tahjir was punched in the back of the head and repeatedly struck in the head, torso, and bare buttocks with both hand and shoe, Philly.com reported, citing Smith’s statement to police.

After Tahjir peed his pants and became unresponsive from the beatings, King placed the boy in the shower and ran both cold and hot water on him, according to what the police were told.

The child was “severely punished and beaten and then burned in a shower,” Montgomery County District Attorney Kevin Steele said, according to Fox29.

Investigators told of a range of imprints being found on the child’s body.

Smith told police at one point she noticed her unresponsive son’s eyes roll back into his head and his mouth open, prompting her to take him outside and call 911, according to the documents.

Smith and King then fabricated a story about why the boy wasn’t responsive, the station reported.

According to the coroner, the child had previous injuries including broken ribs.

“Unfortunately, it looks like the child didn’t go through this the first time last night,” Steele said. “It’s gonna be our time to stand up for a child who can’t speak for himself anymore.”

The home where the family lived was noted by police as being in “deplorable” condition and infested by cockroaches, the documents stated.

At the time of reporting, King and Smith were being held on a $500,000 bail each and a preliminary hearing has been scheduled for Jan. 31, according to the station.