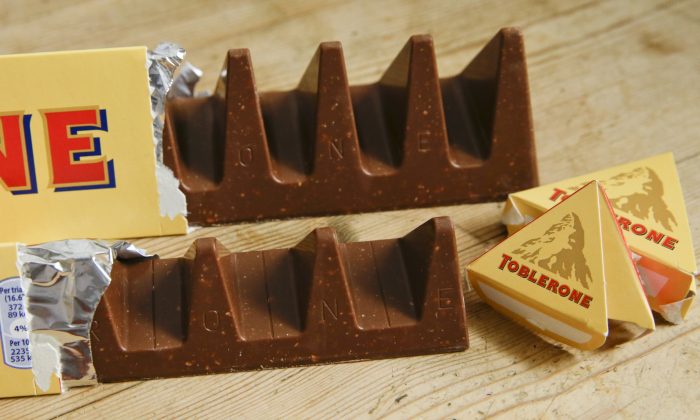 In this photo illustration two bars of the Toblerone Swiss chocolate are shown, at front is the new style 150 gram bar showing the reduction in triangular pieces, in the background is the older style 360 gram bar, pictured in London, on Nov. 8, 2016. (Alastair Grant/AP Photo)
UK

A mother said she was surprised when her young son told her that there is a “hidden” picture on the Toblerone label.

Twitter user “Stephanie,” said she gave her son a piece of Toblerone chocolate days after Christmas. The boy, who is 9, then asked why there is a bear on the triangular box.

My son had his first Toblerone today. “What’s the bear for?”
Me: “what bear?”
.
I was today years old when I found out there’s a bear in the Toblerone logo. pic.twitter.com/CmwRO2BFww

“I was today years old when I found out there’s a bear in the Toblerone logo,” she said in a tweet that got about 10,000 retweets and 30,000 likes on the social media platform. “My son had his first Toblerone today. ‘What’s the bear for?’ Me: ‘What bear?’”

“I had never seen that!!! Your son is brilliant!” wrote one Twitter user.

“My god. I’ve been familiar with Toblerone for forty years and I’d never seen the bear (full disclosure: it took me a minute or two to find it after reading your tweet),” another wrote. Another person: “I just blurted out, ‘Did anyone know about the Toblerone bear?’ And my son replied without raising his head, ‘The one in the mountain? What about it?’ They know things.”

The bear can be seen in the middle of the mountain. The bear is a symbol for Bern, the Swiss capital city, where the product is made. The triangular shape of the Matterhorn in the Swiss Alps is commonly said to have given Theodor Tobler, the maker of the chocolate, the inspiration for the shape of the iconic chocolate’s packaging.

“This is a great example of incorporating a company’s roots into their logo so they never forget their origins,” says Magnitude magazine about the logo.

But, according to his sons, the triangular shape originates from a pyramid shape that dancers at the Folies Bergères created as the finale of a show that he saw.

“Theodor Tobler and Emil Baumann (Theodor Tobler’s cousin) invented a unique chocolate bar, Toblerone. Toblerone’s special recipe, triangular shape, and instantly recognizable logo made it distinct. ‘Toblerone’ is a play on the names “Tobler” and “Torrone,” the Italian word for honey and almond nougat,” its website says about the logo.

There are hidden pictures in other logos.

“The legendary FedEx logo is classed a holy grail by some designers for its use of negative space. Designed in 1974 by Lindon Leader, the logo has won over 40 awards internationally. … This design was created to subliminally feed thoughts of forward thinking and movement,” Magnitude says of the logo.

Between the “E” and the “X” in the logo is a picture of an arrow pointing to the right.

NBC is another logo that shows a hidden picture created using negative space.

“This is one of the most popular logos in the world with great meaning behind it. Each of the peacock’s feathers represenst a branch of the NBC Network: Entertainment, Stations, Network, and Productions. The peacock’s head is also looking to the right as opposed to the left, to suggest looking forward to the future, not back at the past,” said the magazine of NBC’s logo.

And Wikipedia is another one. “Not so much a hidden meaning, but have you ever wondered why the spherical jigsaw that is the Wikipedia logo has parts missing? It’s pretty simple, Wikipedia’s goal is to be an encyclopedia of knowledge for everybody, everywhere. Having the sphere incomplete represents the fact that it will always be a work in progress, increasing in articles and information every day,” the magazine said.

The Wendy’s logo, meanwhile, appears to say the word “mom” in the girl’s collar.

Baskin-Robbins, the ice cream chain, is famously known for having 31 different flavors.

The chain makes it known inside its logo, as shown in the pink.

Tostitos also has a “hidden” image in between two “Ts” in the middle.

They show two people holding a chip over a salsa bowl.

Sun Microsystems, meanwhile, includes the word “SUN” in every direction in the diamond portion of the logo.