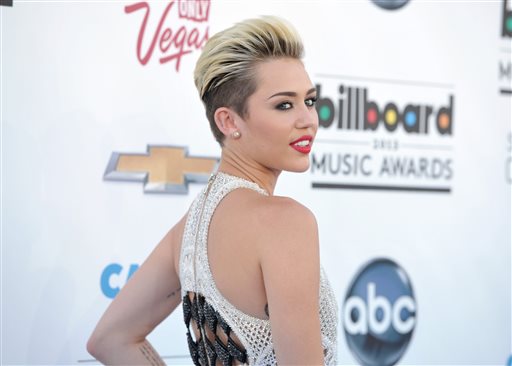 Miley Cyrus arrives at the Billboard Music Awards at the MGM Grand Garden Arena on Sunday, May 19, 2013 in Las Vegas. (Photo by John Shearer/Invision/AP)
Entertainment

Cyrus previously didn’t deny saying that “dancing with molly” was included in her hit single, “We Can’t Stop.”

“It depends who’s doing what. If you’re aged ten [the lyric is] Miley, if you know what I’m talking about then you know. I just wanted it to be played on the radio and they’ve already had to edit it so much,” she told the Daily Mail. “I don’t think people have a hard time understanding that I’ve grown up. You can Google me and you know what I’m up to — you know what that lyric is saying.”

However, she later said that it is actually “dancing with Miley.” Cyrus told MTV recently that she is “obviously” singing “Miley” and not about molly, which is the powdered form of MDMA, an empathogenic drug that was popular during the rave and club scene of the early 1990s onward.

The Huffington Post on Sunday reported that the “dancing with Miley” or molly part was censored MTV during her racy, controversial performance. Kanye West also made reference to it in “Blood on the Leaves,” but it was also not included.

On Twitter, a number of users commented about the lyrics, with some speculating that Cyrus was on the drug in a roundabout attempt to criticize her performance.

“#VMAs censor molly in Miley’s song. as if. Would they have done the same as @rihanna sang ‘as we moonshine & molly’ in Diamonds? Has anyone?” wrote one user.

Another added: “Miley definitely popped a Molly before that performance. Sheesh.”

“Miley Cyrus , will soon be Molly Cyrus …..” another wrote.