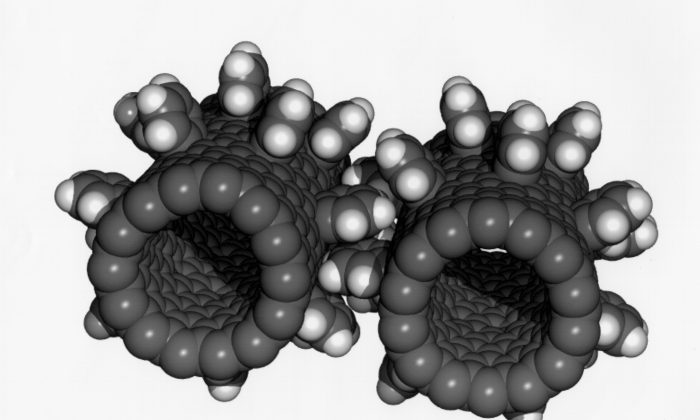 Nano-architects design materials that can work together at very tiny scales, like these interlocking gears made of carbon tubes and benzene molecules. (NASA)
Science

When Thomas Edison wanted a filament for his light bulb, he scoured the globe collecting thousands of candidates before settling on bamboo. (It was years before people were able to make tungsten work properly.) That’s our traditional way of getting materials. We picked up stones for axes, chopped wood for housing, and carved tools out of bone.

Then we learned to synthesize new materials out of old ones, like shaping clay into bricks or pots and baking them into stone. Plastics entered our repertoire as a concoction of cotton, acid, and wood tar.

Much of the quest for novel materials has moved into science labs. The search is more efficient than when Albertus Magnus (allegedly) synthesized the Philosopher’s Stone, but the game is still intelligent serendipity. We try combinations of ingredients, combinations of heating, mixing, and other processes, and hope that one of them works.

Architects and engineers do not wait on search or serendipity to produce a novel bridge that doesn’t collapse under a 10-ton truck. They use established principles, paper and pencil (and software) to produce a design that they can confirm, by computation and deduction, will meet the necessary specifications.

The Challenges of Design-Build Planning

One of the great technological challenges of this century is to design novel materials to satisfy given specifications—and then, when the material is synthesized, have it meet those specifications.

How to Take Detailed 3D Images of Nano-Objects

But there is a problem. Unlike bricks, beams, and mortar, people cannot pick up atoms or molecules with their hands and place them in a structure.

Let’s consider one (very nice) example: DNA. With current technology, DNA is much more easily manipulated than other materials; during the past few decades, we have developed many ways to manipulate DNA molecules.

In 1980, Nadrian Seeman looked at M.C. Escher’s “Depth,” an infinite regular array of fish, and decided to make it—which he ultimately did three decades later.

In between, he made a cube of DNA; Paul Rothemunde made a DNA smiley face, Leonard Adleman showed how DNA can compute things, and a whole community arose making nano-things out of DNA.

Rothemunde’s smiley face is a likely harbinger of things to come. It is a sort of nano-textile, with a very long DNA strand, folded back and forth so that it covers a circle. Two hundred short strands— “staples”—hold the long strand together.

It isn’t just the outline (the long strand with its folds and staples) that is designed in advance. Each DNA strand has its own code, which can be used to control how different DNA strands bond to each other.

The codes of the long strand and the staples are computed in advance, and from these designs, strands are synthesized and mixed together to produce the intended structure.

Meanwhile, chemists and materials scientists are making progress on less controllable materials, like proteins and crystals.

For example, a decade ago, Omar Yaghi, Michael O’Keeffe, and four colleagues published a manifesto on “reticular synthesis” in nature.

They observed that crystals have regular molecular structures, and proposed that chemists should design a structure and then make crystals from the design.

Ultrasound Could Transform 3D Printing for a Future of Smart Materials

One of the major efforts is making a porous crystal that can serve as a safe and stable storage tank for hydrogen powered cars. (Porous crystals, with nanoscale channels and chambers, are not oddities: you may find some in the catalytic converter in your car or even your cat’s litter box.)

Many of our major technological challenges will require new materials with specific properties, whether for a new drug, a solar panel, a computer chip, or airplane skin.

When we see progress in medicine, energy, computing power, and transportation, the materials revolution is an integral part of the scientific process of discovery.

Gregory McColm is an associate professor of mathematics and statistics at the University of South Florida. This article was originally published on The Conversation.