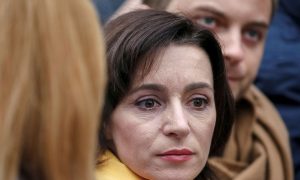 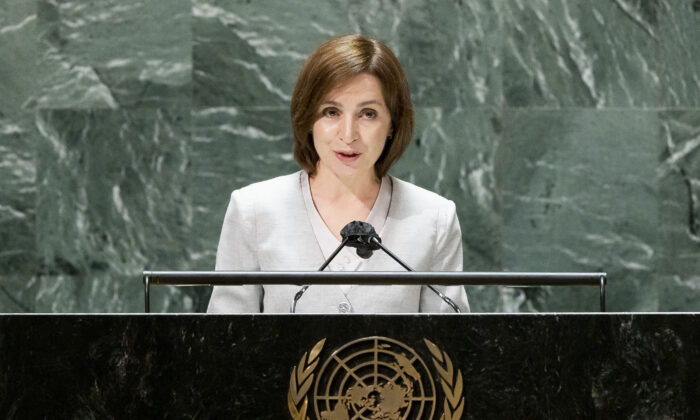 Moldova’s first female president, Maia Sandu, broke a long custom by not honoring the Chinese ambassador to Moldova at the end of his term in office. Analysts suggest this is an indication of Moldova changing its long-term pro-China position.

Sandu, 49, assumed office on Dec. 20, 2020, becoming Moldova’s first female president by defeating Igor Dodon, the former President of Moldova and leader of the Socialist Party of Moldova, in its 2020 presidential election. Moldova is a post-Soviet state in Eastern Europe with a population of 4.02 million. It declared independence on Aug. 27, 1991.

On Sept. 20, Sputnik, a Russian state-owned news agency, reported that Dodon disclosed that Sandu had not honored the Chinese ambassador to Moldova, Zhang Yinghong, who had recently ended his term.

Dodon said that Sandu’s actions were provocative toward China, especially in recent months awarding honors to the United States, the European Union, and France. Dodon called China a strategic partner of Moldova and accused Sandu of “disrespecting” the Chinese Communist Party (CCP).

According to the official website of the Chinese embassy in Moldova, on Sept. 17, Zhang paid a farewell to Moldova’s Deputy Prime Minister and Foreign Minister Nicolay Popescu, but Sandu was not present.

Sandu graduated from the Academy of Economic Studies of Moldova in 1994 and obtained a master’s degree in public policy from Harvard Kennedy School in 2010. From June 2010 to July 2012, she served as an adviser to the World Bank’s Executive Director in Washington. From July 2012 to July 2015, she served as minister of education of Moldova, and from June to November 2019 as prime minister before her presidency.

On Aug. 27 this year, the 30th anniversary of Moldova’s independence, Sandu told all citizens that Moldova would take firm steps to integrate into Europe and obtain a foothold in the European Union (EU). Sandu is the first Moldova leader to openly state a pro-EU stance and vision of entering the European Union, something she has done since 2016.

According to China’s Ministry of Foreign Affairs, Moldova and the CCP established diplomatic ties on Jan. 30, 1992. Since then, the two sides have frequently cooperated in political and economic fields and frequently exchanged visits.

In September 2009, the CCP established its first Confucius Institute in Moldova. Confucius Institutes are commonly regarded as a way for Beijing to spread propaganda under the guise of teaching, interfere with free speech on campuses, and even spy on students. An investigative report issued by the Canadian Security Intelligence Service in 2007 stated that the CCP tried to use the Confucius Institute to exercise its soft power.

In September 2013, after CCP leader Xi Jinping first introduced the “Belt and Road Initiative (BRI),” Moldova and six other countries in Europe and Asia signed a memorandum of understanding on co-construction of the BRI in cooperation with China’s Ministry of Commerce.

Moldova had relied on Russia for a long time and actively supported the policies of the CCP. For example, in May 2010, under the CCP’s intervention, the National Theatre of Opera and Ballet canceled two performances by Shen Yun Performing Arts.

On the morning of May 25, 2010, local time, the New York-based Shen Yun Performing Arts troupe and orchestra arrived outside the National Theatre of Opera and Ballet in Moldova as scheduled, preparing to enter the theater to prepare for its 7 p.m. performance, NTD reported. However, the theater door was closed, and the theater staff waited more than 5 hours outside the door, but the theater office and the local government refused to respond.

The theater manager revealed to the public on May 24, 2010, that China’s Ministry of Foreign Affairs and the Chinese embassy in Moldova exerted tremendous pressure on the Moldovan government to coerce the cancellation of the two Shen Yun performances.

Moldova’s move was criticized by the U.S. State Department’s 2010 International Religious Freedom Report. The report stated that although the Moldovan Theater signed a performance contract with the Falun Dafa Association on Jan. 20, 2010, the theater succumbed to pressure from Andrei Popov, the minister of foreign affairs and European integration, to cancel the scheduled performance. Popov said that the performance could have damaged diplomatic relations with the CCP.

New York-based Shen Yun Performing Arts rose to become the world’s premier classical Chinese dance company within just a dozen years, reviving an ancient art form that was lost in China under communist rule. In 2006, artists from around the world, including some who escaped persecution in China, came together in New York to form an arts company to revive 5,000 years of Chinese civilization and present true traditional Chinese culture to the world. The Chinese regime has long interfered with performances worldwide since Shen Yun began touring, attempting to discredit the company and pressure theaters and governments into canceling the show.