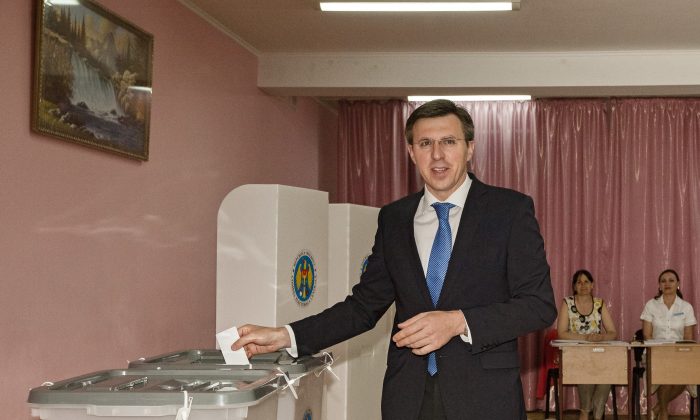 Dorin Chirtoaca, the pro-European candidate for mayor of the Moldovan capital casts his ballot in a runoff for local elections in Chisinau, Moldova, Sunday, June 28, 2015. Moldovans were voting Sunday in local election runoffs that are being seen as a test of whether the former Soviet republic moves closer to the European Union or Russia. (AP Photo/Dan Morar)
Europe

CHISINAU, Moldova— Moldovans were voting Sunday in local election runoffs that are being seen as a test of whether the former Soviet republic moves closer to the European Union or Russia.

The key post is for mayor of Chisinau, the capital, where pro-European incumbent Dorin Chirtoaca faces pro-Russian challenger Zinaida Greceanai, a former prime minister of the Communist Party. A low turnout in the city of one million will benefit the 59-year-old Greceanai, while a higher number of voters will benefit Chirtoaca.

“I hope we will clarify things…. and build something that is certain, definitive, irreversible, for the future of Chisinau and Moldova,” Chirtoaca said after voting.

“Residents have a great desire to see deeds and not just statements,” said Greceanai.

Runoffs were being held in 458 towns in this country of 4 million. Some 348 seats were already decided in the first round. Early results are expected late Sunday.

Moldovan officials, meanwhile, have been investigating the disappearance of the money from state-owned and private banks before the parliamentary election last November. Moldova’s currency has lost 20 percent value this year.