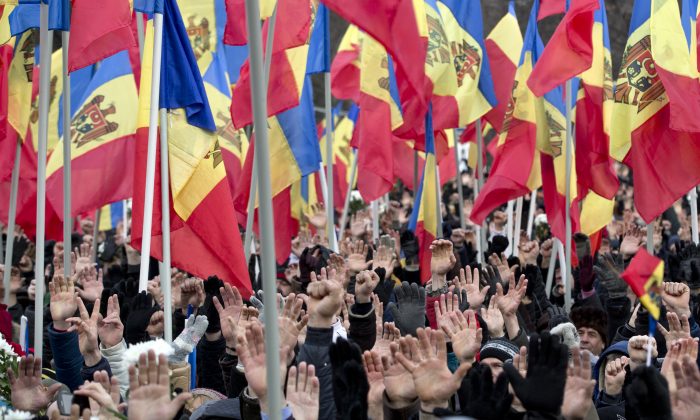 People raise their hands during a large protest in Chisinau, Moldova, on Jan. 24, 2016. More than 15,000 people gathered to protest against the government, demanding early elections in the impoverished East European nation, an action that comes after demonstrators stormed Parliament last week as lawmakers approved a new pro-European government. (AP Photo/Vadim Ghirda)
Europe

CHISINAU, Moldova—More than 15,000 people gathered in the Moldovan capital Sunday to protest against the government and demand early elections in the impoverished East European nation.

Protesters shouted “We want the country back!” and “Unity, citizens!” in Romanian and Russian as the temperature fell to -10 Celsius (14 F). The rally was organized by two pro-Russian parties and the civic group Dignity and Truth.

Protesters later began a march toward the Constitutional Court. The leader of the Socialists’ Party, Igor Dodon, called on demonstrators to block one of the main entrances to the capital and thousands started to march through the capital of one million to the edge of the city, some waving Moldovan flags.

The demonstrators are angry about falling living standards in the impoverished country where the average monthly salary is just 220 euros ($240). They say pro-European parties, which have been in power since 2009, have failed to carry out reforms and want Parliament dissolved and early elections to be held. They are also calling for a full inquiry into the disappearance of up to $1.5 billion from three banks prior to parliamentary elections in 2014.

Moldova has been mired in instability since 2014 and has had five prime ministers in the past year. Parliament would have been dissolved if it had failed to approve a government by Jan. 29.