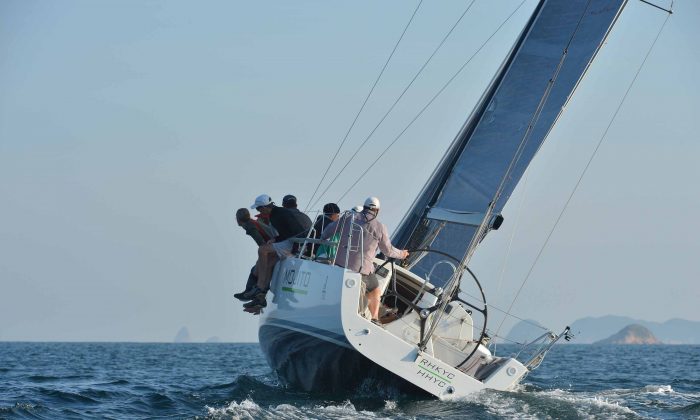 HONG KONG—There was not a big turnout for the final races of the Hebe Haven UK Sailmakers Winter Saturday Series at Port Shelter on Saturday Dec 20, but those that did come had a pleasant surprise. After drizzly rain the day before, out came the sun for what was an excellent afternoon for racing. Without the Dragon Class boats taking part on this final day of the series there were 5-IRC racers and 10-HKPN competitors.

IRC
“Lighthorse” took line honours and finished with 6-consecutive 2nd places to finish the series in 2nd place overall, but “Mojito” continued to dominate on corrected time finishing with another two 1st places taking the series top prize with a clean sweep of 1st place. The GP 26, “Stingray” took 3rd place in the series competing against the other much larger crafts. “Outrageous” performed well in the last two races taking two 3rd places but in missing two race days in the series, as did “Goddess” and “RB”, dropped them down the order in the final placing.

HKPN
“Ichiban” went into the last day of the series well in the lead of the other boats in the HKPN Division but had a poor final day by their standards with a ‘Did Not Finish’ (DNF) and an 8th place but still walked away with the series first prize.

There was however, an excellent final-day competition for the next lower order places. After Day-3 there were five HKPN boats in contention for 2nd and 3rd places in the series. At that stage, assuming 2-discards available “Getafix”, “Applause” and “X-Terminator” were all on net 14-points, “Kyte” was on 15 and “Bits & Pieces” was on 16 points.

“Getafix”, “Applause” and “X-Terminator” each conceded 6-points in the last two races whereas “Bits & Pieces” finished in 1st and 2nd place to minimize her points tally to 3, to jump her from 6th place and take 2nd place overall on 19 points. “Applause”, “X-Terminator” and “Getafix” all finished with 20-points but “Applause” took the 3rd place on count back. “Kyte” finished 4th and 9th place in Day-4 races dropping her to 5th place overall.

Dragon Class
Although the Dragon Class boats did not take part on the final day of the series, “Zephyr” (D55) finished top with 9-points, “Davinloong” (D46) finished second on 15-points and “Kam Loong” (D8) took 3rd place with 17 points.