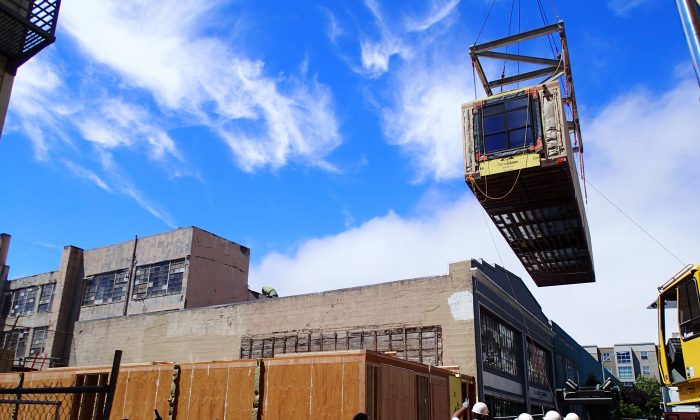 For developers in San Francisco, “it’s the best of times, and it’s the worst of times,” says Panoramic Interests CEO Patrick Kennedy.

If you’ve just put a building on the currently under-supplied market, it’s a really good time. But if you’re in the earlier stages of a project, everything is getting expensive.

“If you want to bring down the cost of housing, you have to be more dense—simple matter,” Kennedy said. “Land is expensive in San Francisco, and to the extent that you can provide more units on any given piece of land, you can lower the cost of the housing.”

Panoramic Interests’ SoMa Studios at 38 Harriet was leased earlier this month by the California College of the Arts as a dormitory. The micro-apartment building was built offsite, designed by ZETA Design+Build and constructed by Pankow.

“We wanted to use this as an example of how to use hyper-dense, hyper-green, hyper-efficient urban development,” Kennedy said. “We’ve only done one in San Francisco—23 units—but the next one will be a little bigger laboratory.”

Next, there’s a 12-story building in development for 9th and Mission, with 120 micro-apartments and 40 two- and three-bedroom apartments.

“The micro-apartments by their very nature use far fewer materials to satisfy basic housing needs; they’re also super efficient in terms of energy consumption. I think our typical apartment’s electrical bill is less than 15 bucks a month,” Kennedy said. The buildings are also car-free—a requirement Panoramic Interests deliberately looks for when scouting sites, with a car-share pod in the front, and it makes use of solar heating and solar-heated hot water.

“They’re generally triple the density of a typical apartment building, so they’re far more efficient in their use of the very limited natural resource of land,” Kennedy said.

“We build on remnant sites that are largely overlooked by most developers,” Kennedy said. “For example, this site on Harriet is a 3,700-square-foot site that is too small for most developers and probably too big for your average small-time developer. It’s kind of a betwixt-and-between, oddball site.”

Kennedy decided to focus on micro-apartments after selling a number of apartment buildings in 2007.

Most of Panoramic Interests’ business has been in Berkeley thus far.

“Berkeley is welcoming to high density infill development and the battles that we fought in Berkeley 15 years ago seem to be still going on in various neighborhoods in San Francisco now,” Kennedy said. “San Francisco has a much denser regulatory thicket to pass through, … which can’t be simplified, as far as I can tell, very much.”

“We think the market is unfulfilled in San Francisco. There are a lot of people who are deliberately living more edited lives, who spend a lot of time on the city proper, and we want to fulfill that need,” Kennedy said.