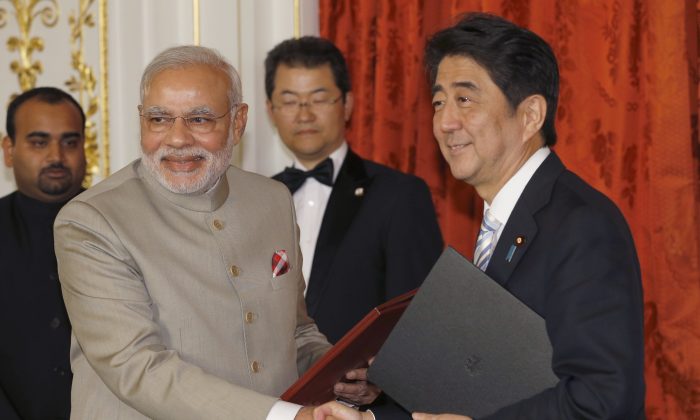 NEW DELHI—India’s Prime Minister, Narendra Modi, signed a series of important agreements during his visit to Japan. Analysts say this is an indication of India’s more active foreign policy and emerging strength in the regional framework.

In his first visit out of South Asia, Modi got Japanese Prime Minister Shinzo Abe’s promise of $35 billion in Japanese investment over the next five years. Japan agreed to remove constraints on six space and defense entities, and India in turn promised to set up a “Japan fast-track” for Japanese investors in India.

“If they are seen to be acting in greater synergy, cooperation, particularly in technology and investment, and India moves up the manufacturing ladder, I think it would have an impact across the region,” said C. Uday Bhaskar, director of the Society for Policy Studies in New Delhi.

From Japanese soil, Modi sent strong indications to the global community, particularly to other major players in Asia like China, about India’s future of as a country and its hope for the region.

“We have to decide if we want to have ‘vikasvaad’ [development] or ‘vistarvaad’ [expansionism],which leads to disintegration,” Modi told to Japanese businessmen on Monday, according to NDTV. “We see those having ideas of the 18th century [expansionism], engage in encroachments and enter seas [of others]”

He added that if Asia is to lead the world, Japan and India must pursue the path of development.


Modi’s statement was an indirect swipe at the China, which has been in territorial conflicts with its Southeast Asian neighbors.

“There has been a fairly deeply felt anxiety about China’s assertiveness,” Bhaskar said. “Whether it’s ASEAN [Association of Southeast Asian Neighbors] where you have Philippines and Vietnam or at Japan, there’s concern about the way in which China has frankly flexed its muscles.”

Foreign Minister of the People’s Republic of China, Qin Gang, said at a press briefing in Beijing he had no idea what Modi was talking about.

Modi is scheduled to host Xi Jinping in a visit to India later this month. When asked about the Indian Prime Minister’s trip to Japan, Qin said they were aware of the visit. He said the plans for Xi’s visit are still underway.

India’s two-decade-old ‘Look East’ policy, which was about engaging with southeast Asian countries, is now being termed ‘Acting East’. India is more assertively engaging beyond Southeast Asia with countries like Japan, South Korea, and China.

“I also see a broadening of the spectrum, meaning, whereas initially we were more focused on trade, commerce and issues of this nature, now the attempt is also to seek foreign direct investment, look at technology, and then move up the ladder as it were to create a political and security/strategic engagement,” Bhaskar said.

As per this policy, India is more assertively acting on its interest in the southeast Asian region. Modi discussed civil nuclear energy with Abe during his visit, and India and Vietnam recently agreed to solidify their cooperation in the defense and oil sectors.

India’s Foreign Minister, Sushma Swaraj, talked about the ‘Acting East’ policy during her visit to the Vietnamese capital Hanoi last week. She has also visited Burma, now known as Myanmar, and Singapore in an effort to improve ties with India’s neighbors. During her visit to Hanoi she informed heads of missions in East and Southeast Asian countries of the new government’s foreign policy direction.