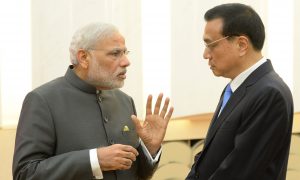 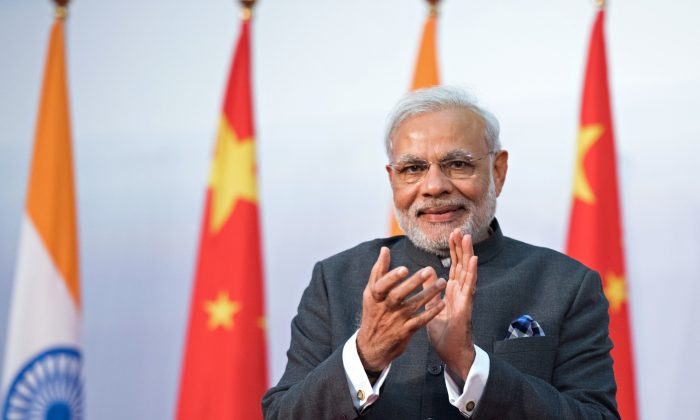 NEW DELHI—The atmospherics surrounding Prime Minister Narendra Modi’s China visit were unprecedented. From a Tang Dynasty–era celebratory dinner to Modi tweeting a selfie with Premier Li Keqiang, the visit received a level of attention and publicity not seen since the 1954 visit by India’s first Prime Minister Jawaharlal Nehru in the heyday of India–China friendship.

But the trip turned out to be one of less than meets the eye. While many agreements and memorandum of understandings were signed, expectations about an out-of-the-box solution to various contentious issues remained unfulfilled.

Many aspects of the visit have raised expectations. Out-of-turn protocol gestures by the Chinese leadership were matched by the impressive personal diplomacy of Modi. Direct communication with the youth, academia, and Chinese CEOs; the novelty of highlighting cultural and civilizational links; widening the basis of engagement by recognizing the diaspora’s role; and liberalization of travel and tourism from China—all bear Modi’s personal stamp.

A note of pragmatism and forthrightness in talks and, above all, personal rapport with the Chinese leadership, are hailed as Modi’s accomplishments.

Indeed, the Chinese attach great importance to personal contacts and summit-level diplomacy as a measure of the willingness of their interlocutor to invest in the relationship. Modi too, values personal diplomacy and establishing rapport with fellow leaders.

However, these positive developments assume strategic significance for stability in the relationship only if backed by an acceptable degree of progress on areas of core concerns. Also, past experience has shown the prudence of not building exaggerated hopes of personal rapport between leaders to take both nations beyond the formal, bureaucratic postures normally projected with each other.

How then has Modi’s approach translated in resetting the trajectory of India’s relations with China? For one, it’s perhaps the first time that India articulated its grievances frankly, when Modi publicly reminded his hosts of the “complex” issues and of “the need for China to reconsider its approach on some of the issues that hold back the relations from realizing their full potential.”

He also underlined the “importance of clarification of the Line of Actual Control [LAC]” for the contested Himalayan border. In his address at Tsinghua University, Modi raised the common threat to stability from extremism and terrorism arising from the same source, highlighting the importance of bilateral cooperation to ensure security of sea lanes—another common concern.

More significant was his message that any plans to connect fragmented Asia, as proposed by China’s One Belt, One Road project, should be a joint endeavor with India.

For the first time, a tone of equality in the relationship, missing in Chinese attitudes and actions, found an acknowledgement in the joint statement that spoke of the simultaneous re-emergence of India and China as two major powers in Asia and the world.

Certainly, the agreement to keep channels of communication at the highest levels, together with the decision to establish a series of high level and functional mechanisms in the political, military, and economic spheres, will contribute to maintaining predictability in the relationship.

The establishment of new platforms for exchanges among think tanks, media, financial regulators, and entrepreneurs will promote additional ties and widen the scope for bilateral dialogue.

Yet on the boundary question, even as the joint statement affirms an early settlement as a strategic objective for the two governments and determination of the two sides to actively seek a political settlement, the Chinese remained firm on not answering Modi’s forthright call to resume the process of clarifying the LAC to “remove a shadow of uncertainty.” The fact that the boundary question did not find a reflection either in the statements of Chinese leaders or in the joint statement may convey the message to expect no movement on this issue soon.

This impression of lack of movement was also reinforced by the absence of any reference to the historic agreement on “Political Parameters and Guiding Principles” as the basis of negotiations for settlement of the boundary question signed in 2005.

This landmark agreement contains some of the cardinal principles India has pressed for several years. Though not unknown for its ups and downs, due to China’s shifting position, the agreement has continued to be the benchmark on the boundary question that figures in all the summit-level documents. As recently as during President Xi Jinping’s visit to India in September 2014, this agreement was the crux of the paragraph on the boundary settlement.

Similarly, the fact that the “Strategic and Cooperative Partnership” sought by China in 2005 is replaced by “Developmental Partnership,” identified as its core component since Xi’s visit, reflects lowered expectations. The Five Principles of Peaceful Existence, the staple of all India–China documents, was also dropped from summit documents, perhaps to project ground realities more realistically.

A significant concession to China, as during Xi’s visit, was India’s reference to the “Tibet Autonomous Region of the People’s Republic of China” in the joint statement during Modi’s visit, a practice jettisoned by the previous Congress-led UPA government to convey India’s displeasure at China’s escalating pressure on Arunachal Pradesh, an Indian state claimed by China.

India also decided to make a grand gesture to grant e-visas to the Chinese to expand tourism and people-to-people exchanges. China did not reciprocate by ending its practice of giving Indian nationals living in Arunachal and Kashmir stapled visas rather than simply stamping their passports, thus refusing to acknowledge India’s claims.

Similarly, India’s aspirations for membership in elite multilateral bodies, intergovernmental and regional organizations, where China`s support might be crucial, received an attentive hearing—at best, more forthcoming than in the past on Indian interest in joining the Nuclear Suppliers Group, Shanghai Cooperation Organization, and Asia–Pacific Economic Cooperation.

China’s lack of transparency in its activities in India’s neighborhood and its close ties with Pakistan remain a major concern for India. China’s recently promised $46 billion infrastructure investment to Pakistan for the China–Pakistan Economic Corridor (CPEC) running across Pakistan-occupied Kashmir, challenges Indian sovereignty.

China’s attempt to explain away these massive plans as merely commercial, fails to convince, especially when accompanied by the reported raising of a special security force by Pakistan to safeguard Chinese projects and installations.

India demonstrated wariness by not rushing to join China’s One Belt, One Road, without doing due diligence to ensure the project did not pose a security threat.

India is expected to anchor this relationship with China on a solid economic foundation in an interdependent and globalized world, where political security is increasingly becoming a factor of economic linkages. However, economic interdependence and booming trade alone are no guarantee for commitment to each other’s core concerns.

Purely in terms of economic cooperation, also, the test is how much China would be willing to invest in India, the extent of technology transfer and generation of employment by Chinese investment, and how open the Chinese market would be to Indian products, services, and entrepreneurs.

The agreed conclusions of the visit do not mirror Modi’s hard talk. But neither does this argue for the two countries to avoid a more proactive relationship. Articulating the differences is a fair indication that the first necessary steps have been taken, laying the groundwork for more clear-eyed dialogue with China.

Articulating the differences is a fair indication that the first necessary steps have been taken.

Neelam D. Sabharwal is a former Indian ambassador to the Netherlands, ambassador and permanent representative to UNESCO in Paris, and high commissioner to Cyprus. She is presently an associate professor for the Maastricht University India Institute. The article expresses her personal views. Copyright © 2015 YaleGlobal and the MacMillan Center at Yale University.