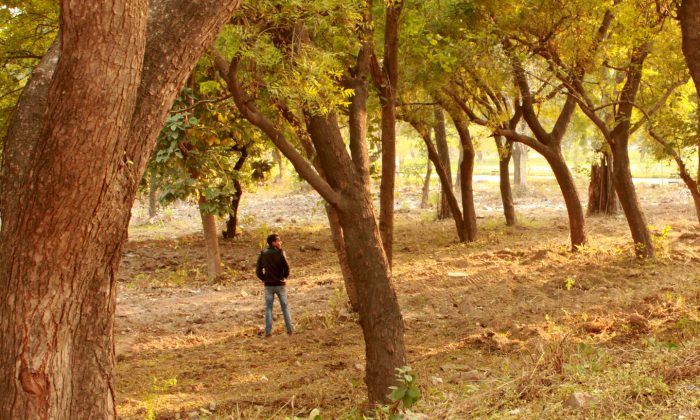 A man urinating in the garden of Purana Qila, the oldest of the forts in Delhi on Feb. 7. (Venus Upadhayaya/Epoch Times)
India

NEW DELHI—It’s a common sight in India to see men peeing against walls and trees in public, a problem that is older than the country’s democracy. And while this phenomena largely stems from a lack of public toilets, there are also cultural factors behind it as well.

According to Bindeshwar Pathak, the founder of the NGO Sulabh International, that runs over 8,000 public toilets across India, the menace of public urination is linked to the lack of a culture around sanitation in the country.

For many generations, people would simply relieve themselves outdoors, and today, less than half of Indians have toilets in their homes, according to 2011 census data. This has translated into Indians today not considering a toilet as important as good food and shelter to maintain a high standard of living, Pathak said.

The Modi government is trying to change people’s attitudes on the issue through a public awareness campaign, which includes billboards showing a man peeing against a wall with, “How long will you be irresponsible? At least have some shame. Clean up your mind,” written in Hindi. It has also released a video that shows people clapping after a person does something unsanitary, like defecating in public, as a way to shame them.

The campaign aims to have a clean India, including better infrastructure for sanitation systems, cleaner streets, and better garbage disposal among other things by the 150th birthday of Mahatma Gandhi in 2019.

Gandhi, who is still a symbol of constructive change in India, wrote in a 1925 issue of his weekly newspaper Navajivan, “To pass urine anywhere on a street, at any place not meant for the purpose, should be regarded [as] an offense.”

Ninety years later, some Indians are joining that call by asking the law to intervene when people use public space as their personal bathroom.

Today, less than half of Indians have toilets in their homes.

Last year, the Delhi High Court rejected a petition asking authorities to ensure that walls were not defaced by men urinating on them.

Civilians across India have taken matters into their own hands by graffitiing slogans like, “Look at a donkey urinating here,” and pasting pictures of gods, goddesses, and holy symbols from different religions on walls.

India’s high court said it regretted that even the pictures of gods could not deter people from urinating on walls, but that it did not have the power to contain the problem either.

“The problem of urinating in public has to be solved elsewhere. Surely, this court cannot make a man, who walks out of his house, keep his [zipper] locked,” the high court bench said, according to the Times of India newspaper.

Around India, various state authorities have, in their own way, tried to deal with the problem. In 2012 the western state of Rajasthan used volunteers to beat drums and whistle to shame a person peeing in public. Repeat offenders were fined.

In a monthlong campaign in 2013, police in the southern city of Bangalore put garlands of flowers on people seen urinating in public. They partnered with a local radio station to post pictures of the offenders on social media.

Civilians across India have taken matters into their own hands by graffitiing slogans like, ‘Look at a donkey urinating here.’

In a civilian effort, a Youtube video called “Pissing Tanker” was posted last April by a user called “Clean Indian.” It shows Indian men being blasted by thick jets of water from a tanker for peeing out in the open. It generated over 3.5 million views, and triggered a robust debate in the comments section, as well as in the media, about the issue of public peeing.

“Very happy that this sort of [response] emerged … but very late …” wrote netizen Vivek Singh in the comments section on YouTube.

To contain the problem, more public toilets and urinals should be built around the country, said Pratima Joshi, the executive director of Shelter Associates, an NGO working on sanitation and anti-poverty initiatives in the western Indian state of Maharashtra.

“People tend to use open defecation and urination because they don’t have access to a toilet nearby very often,” Joshi said in a phone interview.

The lack of facilities in India is especially a problem for women, who cannot go in the open as easily as men.

In a campaign titled Right to Pee over 30 NGOs in the city of Mumbai have been urging authorities to build adequate restroom facilities for women who can fall prey to urinary tract infections from holding their urine.

Pathak said that just having more toilets is not enough however—there has to be a system in place to maintain them. He said civil society should be involved in their upkeep, but ultimately the government needs to step in with fines to ensure the toilets are usable.

Putting toilets in schools, he advocated, would help children learn to take care of them as well as to use them.

“Toilet training should come into the school curriculum. Headmasters [principals] should be fined if the toilets are not maintained,” he said.

As part of the Clean India campaign, the government has promised to have usable toilets in over 100,000 government schools, with separate ones for girls, by 2019. The Ministry of Water and Sanitation said in a press release it has already installed 503,142 latrines in private houses so that people don’t have to go out of their homes to relieve themselves.

While building toilets in schools and homes is a start, it may take better access to public facilities to change the culture around peeing on the street.

“It should be made mandatory that whenever someone starts a restaurant, dhaba [road side restaurant] etc., they should build a toilet along [with it], which should be well maintained. Authorities shouldn’t open a taxi stand or give a license to open a taxi stand if there’s no toilet and urinal there,” said Pathak. “You have to build toilets on a large scale and maintain them.”