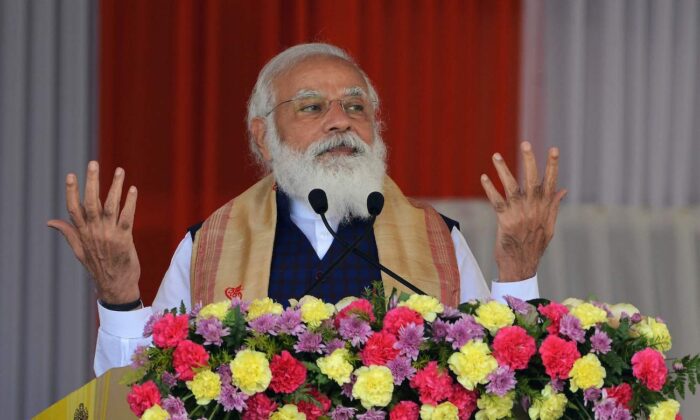 Modi Aims to Make India a Global Hub for Semiconductors

Prime Minister Narendra Modi said on April 29 that he aims to make India a key player in the global semiconductor supply chain, with the country’s consumption of semiconductors estimated to exceed $110 billion by 2030.

Modi urged industry leaders and investors to “seize the opportunity,” saying that semiconductors play a critical role in the formation of “a new world order.”

“India has the appetite for tech and risk-taking. We have put the odds in your favor as far as possible through a supportive policy environment,” he said at India’s first semiconductor conference in the southern city of Bengaluru.

Modi outlined six reasons why India is an attractive investment destination for semiconductor technology, one of which is the country’s development of digital infrastructure that connects more than 1.3 billion users.

Efforts are underway to connect 600,000 villages to broadband, he said, adding that his government is working to unleash “the next wave of innovation in data, AI [artificial intelligence], and other technologies.”

“India is headed for robust economic growth. We have the world’s fastest-growing startup ecosystem,” he said. “India’s own consumption of semiconductors is expected to cross $80 billion by 2026 and $110 billion by 2030.”

Other reasons include the country’s talent pool, its manufacturing sector, and the “wide-ranging reforms” put in place to improve the ease of doing business in India.

Technology Minister Ashwini Vaishnaw said on April 28 that India is in talks with large companies such as Intel, Samsung, and Taiwan Semiconductor Manufacturing Co. (TSMC) about setting up local operations in India.

“India is right there squarely on their global plans whether it is Intel, GlobalFoundries,” he said in an interview with Bloomberg Television. “TSMC is still taking more time, but other big ones are very serious in their plans.”

India had previously unveiled a $10 billion incentives plan to provide financial support to companies investing in semiconductors, display manufacturing, and the design ecosystem. A joint venture between Indian conglomerate Vedanta and Taiwan’s Foxconn is among the corporations that have shown interest in the incentives plan.

Vaishnaw said the government would take six to eight months to finalize the list of qualified companies for the incentives.

“After this first tranche gets utilized, we definitely will go for more,” he said at the conference. “We have the appetite for more, we have the need for more.”