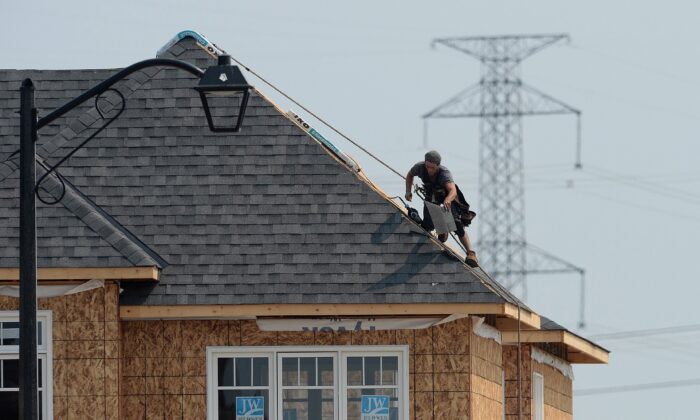 A construction worker shingles the roof of a new home in a housing development in Ottawa in a file photo. (The Canadian Press/Sean Kilpatrick)
Canada

Most Canadian economists expect modest growth this year, despite some disturbing headlines in recent months. Statistics Canada reported that the nation lost 71,200 jobs in November—the worst monthly loss since the economic downturn of 2008. December brought better news—gains of 35,200 jobs, which dropped unemployment levels to 5.6 percent.

Some leading Canadian economists say that both stats are just bumps in the road.

“I didn’t expect a recession in November or now,” says Jack Mintz, president’s fellow at the School of Public Policy at the University of Calgary. “My argument is that U.S. growth looks good for 2020, and as a result we should have positive growth here in Canada. Most forecasts I have seen is Canadian growth somewhere between 1.6 to 1.8 percent, with U.S. growth better at 2.0 to 2.4 percent.”

In the December economic update, the federal government expected 1.8 percent growth in the economy. Mintz concurs.

It seems that the headline-grabbing job losses in November were more of a cautionary tale in statistics than the bellwether of a bad economy.

“One-month employment numbers mean little,” Mintz says. “Even the increase in December was little different from the standard deviation.”

Ian Lee, a commentator and an associate professor of management at Carleton University, agrees. He says it is unreasonable to expect the Statistics Canada monthly employment survey of 50,000 Canadian households to offer pinpoint accuracy.

“The problem with the one-month numbers is they’re highly variable,” Lee says. “The more months you average in, the more accurate is the number.”

Although monthly stats are a poor barometer, some larger trends are apparent.

“Regional growth is very uneven—poor in resource economy and manufacturing but good in services,” says Mintz.

Lee says health care and education are the largest segments of the services sector that comprises most of the Canadian economy. These segments aren’t as susceptible to economic downturns.

“Hospitals still have to service people that come in with a heart attack or a stroke,” he says. “You can’t say, ‘Oh, I’m sorry, we’re having a recession right now. Can you please come back when the recession is over?’”

Neither economist expects major growth. “I just can’t see them continuing to grow more jobs,” Lee says. “More and more boomers are going out the door, so they’re not participating in the labour force. And partly because we’ve hired just about every possible person we can hire.”

Lee warns that the North American economy that has gone up for so long is overdue to come down.

“Where we’re going right now is I’m not sure. I can say this: Empirically, this period of recovery is now past 10 years. Historically, statistically, empirically, the average length of a recovery before you dip into a new recession is five to five-and-a-half years, and that’s been tracked by the United States and Canada since the Great Depression,” he says.

For similar reasons, some economists, such as David Rosenberg, do expect a North American recession. In a podcast last November, Rosenberg said, “If next year’s not a recession, it’s going to feel like it.” Rosenberg said that of 15 economic indicators he tracks, 14 are late in the cycle. He found that the lack of skilled workers is a significant barrier to future growth.

An Angus Reid poll released in November showed that 43 percent of Canadians thought the economy would get worse in 2020, and just 21 percent thought it would improve. Four of every five Albertans expected the economy to worsen, as did 56 percent of residents in Saskatchewan and Manitoba.