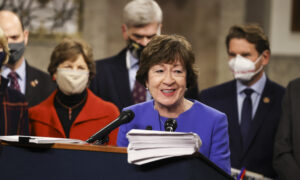 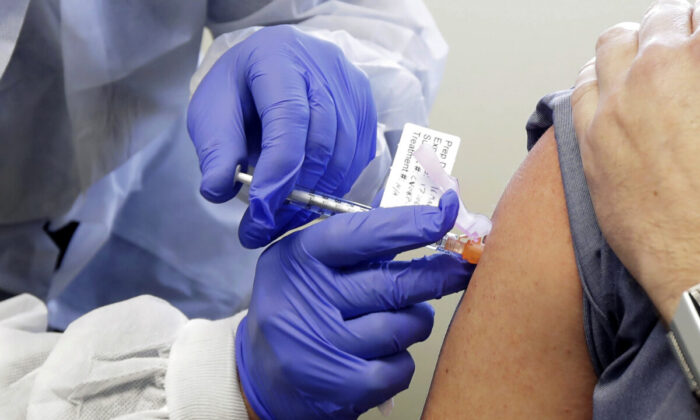 A subject receives a shot in the first-stage clinical trial of a potential COVID-19 vaccine at the Kaiser Permanente Washington Health Research Institute in Seattle, Wash., on March 16, 2020. (Ted S. Warren/AP Photo)
AMERICA

The Food and Drug Administration (FDA) released an analysis of Moderna’s COVID-19 vaccine on Tuesday, concluding it is highly effective and safe.

The FDA’s analysis (pdf) was issued ahead of a Thursday meeting with a panel of independent medical advisers that will discuss whether scientific evidence supports the view that the vaccine, called mRNA-1273, is effective in preventing COVID-19 in people aged 18 and older, and if the known benefits outweigh potential risks.

The agency indicated that the safety data from a clinical trial of the vaccine, which was jointly developed by Moderna and scientists from the National Institute of Allergy and Infectious Diseases (NIAID), demonstrated a “favorable safety profile” and there are “no specific safety concerns identified that would preclude issuance of an EUA [emergency use authorization].”

The review also found that the vaccine “met the pre-specified success criteria,” with an overall efficacy of 94.5 percent in preventing COVID-19 two weeks after the second dose. The vaccine regimen involves an initial inoculation, followed by a booster shot 28 days later. The vaccine is less effective in older people, however, with an effectiveness of 86 percent for those aged 65 and older.

The meeting of the Vaccines and Related Biological Products Advisory Committee is scheduled for Dec. 17, which will include discussions on the safety and efficacy of the vaccine, and will conclude with a vote on whether to recommend it for FDA approval.

Last Thursday, the same committee voted 17-4, with one abstention, to recommend the Pfizer-BioNTech vaccine for emergency use authorization. Officials voting against raised concerns about the vaccine’s use in teenagers aged 16-17 due to a shortage of safety data for this target group. Moderna’s vaccine is being considered for those aged 18 and older.

Immunizations with the Pfizer-BioNTech vaccine, which must be stored at temperatures of minus 76 degrees Fahrenheit or colder, began Monday. Alex Azar, head of the Department of Health and Human Services (HHS), said at a kickoff event on Monday that by the end of January, some 50 million Americans could have received their first shot.

“We literally have millions of doses right now getting out there to the American people,” Azar said. “And by next week, we believe we could be having a second vaccine,” he added. Moderna applied to the FDA for emergency use approval of its vaccine on Nov. 30.

Moderna’s vaccine only needs to be kept at minus 4 degrees Fahrenheit or lower, making it easier to store and transport.