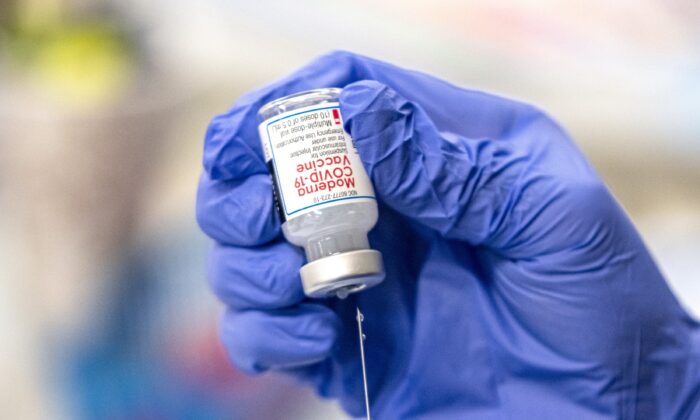 A nurse fills up a syringe with the Moderna COVID-19 vaccine in a file image. (Sergio Flores/Getty Images)
Vaccines & Safety

“Available data support the effectiveness of the Moderna COVID-19 Vaccine in preventing symptomatic COVID-19 in pediatric age groups from 6 months through 17 years of age,” the scientists said in the document (pdf).

The analysis was filed ahead of the agency’s meeting with advisers with regards to requests for emergency clearance from Moderna and Pfizer for their COVID-19 vaccines for children as young as 6 months old. Moderna is also seeking clearance for other adolescents, while Pfizer’s shot is already available to children aged 5 and older.

The analysis was based on results from clinical trials funded by Moderna.

The agency’s conclusion came despite Moderna’s vaccine being just 50.6 percent effective against symptomatic infection in children aged 6 months to 23 months, and just 36.8 percent for children aged 2 to 5.

The primary endpoint of the studies was a certain level of neutralizing antibodies, which are believed to protect against the CCP (Chinese Communist Party) virus. Also known as SARS-CoV-2, the virus causes COVID-19.

Because the FDA has previously authorized the Moderna and Pfizer shots for adults, it is allowing the companies to infer effectiveness based on a technique called immunobridging. Instead of focusing on clinical efficacy, that enabled the manufacturers to only need to stimulate an immune response similar to the response seen in adults.

Children are at little risk of severe illness and death from COVID-19—of approximately 14.2 million cases in youth in the United States, just 1,524 deaths have been reported—and some question whether kids, especially healthy ones, need a vaccine.

Experts told The Epoch Times when Moderna submitted the results to the regulator that they did not warrant emergency authorization.

In a public comment (pdf) regarding the applications, Dr. David Gortler, a senior FDA medical officer and one of the experts, said that no COVID-19 emergency exists for children, meaning emergency clearance should not be granted. Children are much less likely to experience severe illness if they get the CCP virus, and few have died during the course of the pandemic with or from COVID-19.

Gortler noted that the FDA in the summer of 2020 indicated it would only clear vaccines that were 50 percent or more effective, but that the vaccines for children were either below or near that benchmark. FDA officials have more recently said they were not committed to the threshold. Gortler also raised concerns about the side effects, such as heart inflammation, recorded after COVID-19 vaccination.

“The FDA shouldn’t need the reminder that America’s young children are not drug-safety research volunteers and should not be subject to being forced to take objectively ineffective COVID-19 vaccines,” Gortler said.

Moderna officials have said that the trial results show the company’s vaccine is safe and effective.

One case of chest pain was recorded in a 14-year-old boy who was in one of the trials, with him described as saying “feeling like heart is being squeezed” but the case was ultimately determined not to be either of two forms of heart inflammation, myocarditis or pericarditis, FDA scientists said in the new document.

They also discussed two other cases of suspected myocarditis and said U.S. authorities have also received reports of three children who received Moderna’s vaccine despite the lack of authorization who had myocarditis, including two 15-year-old males.

There have been no reports of myocarditis anywhere in the world in children aged 6 to 12, according to Moderna’s safety database.

As far as other safety data, about a quarter of participants in the trials had fevers, a higher percentage than that recorded in older age groups. But the rates in children were not “substantially different” than the rates following “routine childhood vaccines,” FDA scientists said.

The scientists said it was expected the vaccine would be effective against severe illness, even though there was no clinical evidence seen in the trials. Both arms in the studies, including the unvaccinated arm, had zero severe cases of COVID-19.

They also said that children will likely need a booster, or additional dose, in the future.

“Based on experience with adults, it is likely that a booster dose will be needed to increase robustness, breadth, and duration of protection against currently circulating and emerging SARS-CoV-2 variants,” they said.

Scientists with the FDA and Moderna will make presentations at the June 15 meeting of the Vaccines and Related Biological Products Advisory Committee, an outside panel that advises the FDA on vaccines. Panel members will ask questions and discuss the data from Moderna and Pfizer pertaining to the companies’ vaccines and young children. Members will vote on whether they think the FDA should grant the emergency applications. The FDA can ignore the panel’s advice but often takes up its recommendations.

Just 18 percent of parents of a child under 5 plan to get their child vaccinated right away if one or more of the vaccines is authorized for the age group, according to a recent Kaiser Family Foundation survey. Another 38 percent will definitely not, or will only if required. The rest will “wait and see.”