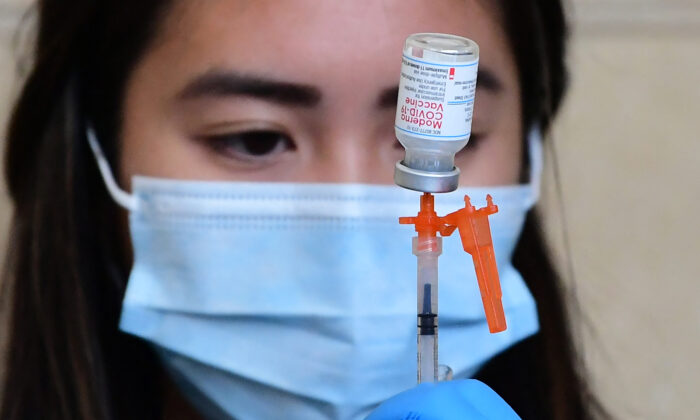 Both cohorts will receive a single additional shot that’s aimed at Omicron, a variant of the CCP (Chinese Communist Party) virus that became dominant in the United States last month.

It wasn’t clear where the trial will take place and a Moderna spokeswoman didn’t immediately return emailed questions.

The announcement came hours after scientists with Moderna, the National Institutes of Health, and other institutions had a study published in the New England Journal of Medicine that found Moderna’s original regimen elicited 25 times fewer neutralizing antibodies against Omicron than the D614G variant, which was dominant worldwide early in the pandemic.

Scientists also discovered the original booster boosted protection against Omicron to 20 times higher when compared to the antibodies detected following the second dose, but that the protection waned by 6.3 times over the following months.

The study examined blood samples from people who were vaccinated with Moderna’s jab.

Moderna’s CEO, Stéphane Bancel, said in a statement that company executives were “reassured by the antibody persistence against Omicron at six months after the currently authorized 50 µg booster” but that due to Omicron’s better evading vaccine protection, “we are advancing our Omicron-specific variant vaccine booster candidate and we are pleased to begin this part of our Phase 2 study.”

Pfizer this week launched a similar study to examine the safety and effectiveness of a reformulated vaccine candidate that specifically targets the Omicron variant.

According to federal data updated through Jan. 22, Omicron was behind approximately 99.9 percent of the COVID-19 cases in the United States. Delta, the previous dominant variant, caused the other 0.1 percent.

Researchers with Pfizer and other institutions said in a preprint study published on Jan. 22 that protection from Pfizer’s two-dose primary regimen and from three doses of the vaccine went down over time against the Omicron variant, similar to the drop seen against the wild-type CCP virus variant, indicating the booster will eventually provide little shielding against infection.

Still, the scientists said the data suggest boosters will protect against severe disease, pointing to analyses from the United Kingdom that showed the booster’s protection against infection dropped quickly but remained relatively high against hospitalization.